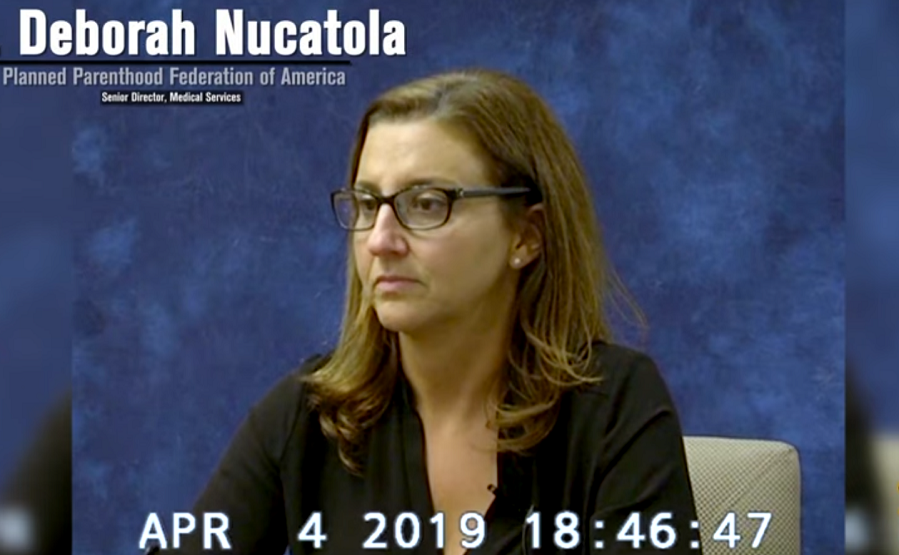 The video exposes the testimonies of several top Planned Parenthood officials and a human tissue procurement company leader during a 2019 sworn legal deposition.

In her sworn testimony, Larton admitted that she has seen aborted babies’ hearts “beating independently” after they are born. She also confirmed that some aborted babies’ bodies are fully intact.

Larton explained that most aborted babies come out of the womb in pieces, but sometimes ABR sees fully intact bodies. Asked about those situations, Larton replied, “They just, sometimes they fall out” of the mother when she delivers the baby in the abortion operating room. When questioned about how often that occurs, she replied, “Once every couple months.”

Asked what happens next, Larton said an ABR staffer will “do a dissection” on the intact aborted baby “to get the tissues that the researchers have requested.” When asked if the babies that just “fall out” have a heartbeat, Larton said, “It would depend,” because “I can see hearts that are not in an intact P.O.C. [product of conception, meaning aborted baby] that are beating independently.”

Other testimony in the video came from Dr. Deborah Nucatola, the former senior director of medical services for Planned Parenthood nationally. Nucatola was caught in the first Center for Medical Progress video eating salad and sipping wine while talking about how she “crushes” unborn babies’ heads to better harvest their body parts.

In the new video, Nucatola was asked if she had “ever had a patient deliver in the operating room a non-viable fetus.”

Nucatola then was pressed repeatedly to define “non-viable.” At first, she defined it as “a fetus that’s not capable of survival.” But when asked how to determine if a baby is viable, she responded, “It depends on where you work.” Questioned again, Nucatola said viability partially depends on the baby’s gestational age, weight and health. However, she also included “the availability of interventions” in her criteria.

This raises serious questions about if Planned Parenthood is allowing babies who would be considered viable in a hospital to die because the abortion facility does not have “available interventions” such as medical equipment or staff to care for the baby and arrange for his/her transportation to a hospital.

According to the Center for Medical Progress, Nucatola used to be in charge of setting the national Medical Standards & Guidelines for all Planned Parenthoods. She also aborted unborn babies at the Los Angeles Planned Parenthood, which harvests aborted baby body parts for Novogenix Laboratories.

A third testimony came from Jon Dunn, CEO of Planned Parenthood of Orange & San Bernardino Counties in California. His affiliate used to work with the fetal tissue companies DaVinci Biosciences and DV Biologics, which were shut down in 2017 after the Orange County District Attorney accused them of illegally selling aborted baby body parts. The companies agreed to close permanently and pay $8 million in a settlement.

Dunn said he knows of one baby was born alive at one of his affiliate’s abortion facilities.

“I know they kept it warm and comfortable for the very brief period that it was alive. I don’t think there was even time to call 911,” Dunn said. Later, he added: “This is something that every obstetrician/gynecologist deals with on rare occasion. … It is their medical judgment what to do in that circumstance.”

“How long will public authorities permit Planned Parenthood and their associates to sell living children inside and outside the womb and then kill them through organ harvesting?” Daleiden asked. “The [Department of Justice] has vigorously prosecuted the sale of eagle body parts. Surely selling human body parts after cutting them out of an infant with a beating heart is at least as grave of a crime.”