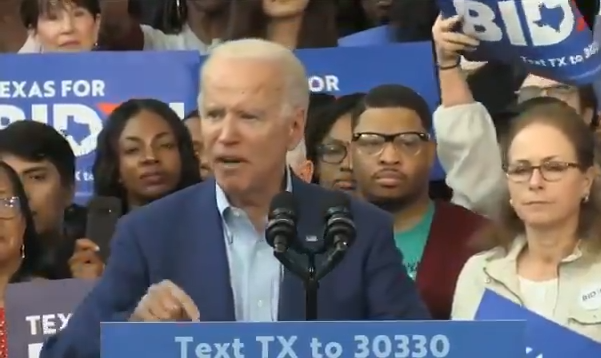 Joe Biden is struggling to win over Christian voters because of his radical pro-abortion stance.

The likely Democrat challenger to President Donald Trump claims to be a devout Catholic, but he supports abortion on demand and wants to force taxpayers to fund it.

That position is abhorrent to many voters, especially evangelical Christians, but Biden is trying to win their support anyway.

Biden often brings up his faith to appeal to voters, though he does not follow the teachings of the Catholic Church. On the campaign trail, he touts his Catholic faith, and his website uses religious language such as loving “your neighbor as yourself” and protecting “the least of these.”

Some of Biden’s campaign appearances and debate answers have been infused with religious undertones, and his campaign reportedly hosts a weekly call with faith leaders to crowdsource policy and personnel suggestions.

At a CNN town hall in February, Biden said his faith “gives me some reason to have hope and purpose” and praised the “ultimate act of Christian charity” shown by members of Emanuel AME Church in Charleston, S.C., after they forgave a white supremacist who murdered nine members of their congregation in a 2014 mass shooting.

In an op-ed last December that included references to Scripture and Pope Francis’ second encyclical “Laudato Si,” Biden described “the core concepts of decency, fair play and virtue” that he learned through his Catholic upbringing as guiding principles in his political career.

David Brody, chief political analyst at the Christian Broadcasting Network, said Biden could take a small percent of evangelical Christian voters away from Trump because of their dissatisfaction with his handling of the coronavirus, the killing of George Floyd and the riots.

“Here’s the problem for Trump: He needs to be at 81 percent or north to win reelection. Any slippage and he doesn’t get a second term, and that’s where Joe Biden comes into play,” Brody told Politico.

According to the report, polls suggest Trump’s support among white Catholics, evangelical and mainline Protestants also is down, giving Biden a chance to win votes.

But religious freedom and abortion are big issues for evangelical voters, and Biden’s positions on both are extreme.

He has promised to codify Roe v. Wade into federal law and force taxpayers to pay for abortions by ending the Hyde Amendment. He also said one of his first acts as president would be to restore funding to Planned Parenthood, the largest abortion chain in America.

Unlike past Democrats, Biden has not talked about wanting to reduce abortions or make them rare, either. In April, he went so far as to call the killing of unborn babies an “essential medical service” during the coronavirus pandemic.

Consistently through the years, polling data has shown that the abortion issue is more motivating to pro-life voters than it is to abortion advocates. Polling among all age groups also consistently finds strong opposition to abortion without restriction up to birth and taxpayer-funded abortions — the position of the current Democratic presidential candidates.

Though Biden once was more moderate, he has a decades-old record of supporting abortion on demand. He supported President Barack Obama’s leadership as the most pro-abortion president in U.S. history.

As the vice president, he supported the administration’s pro-abortion policies, including Obamacare, which forced religious employers to pay for drugs that may cause abortions. What’s more, pro-abortion movement leaders say they “trust” Biden to protect abortion on demand.