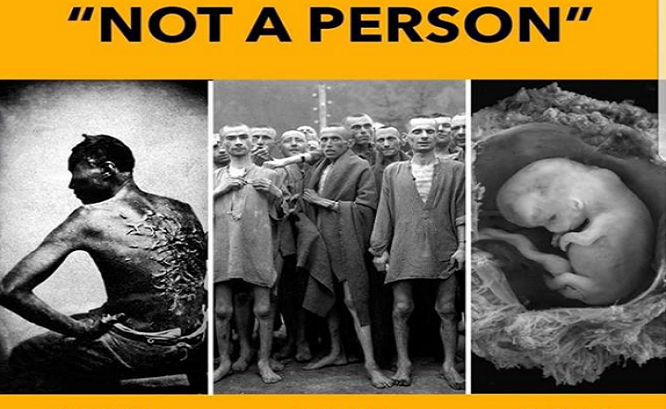 Juneteenth should be a reminder to never see any group of humans as non-persons. It never works out well for the ones victimized by such evil arrogance. Today, the most marginalized and vulnerable humans have been deemed “non-persons” and are violently treated like property. Same wrong. Different century.

This holiday commemorates the eventual announcement to slaves in Texas, on June 19th 1865, that President Abraham Lincoln had set them free. The Emancipation Proclamation was issued over two years prior on January 1st, 1863. Isn’t this how truth works sometimes? It has to get over so many obstacles to finally be heard and bring the freedom that is its very nature.

Although limited in scope, Lincoln’s Emancipation Proclamation set slaves free in states that had seceded from the Union. Many don’t realize Lincoln had issued an emancipation decree that set slaves in our nation’s capital free nearly eight months earlier. On April 16, 1862, The Compensated Emancipation Act abolished slavery in Washington D.C.; today it’s celebrated as “Emancipation Day.”

The evil of slavery is a blood-soaked stain on American history. It was not just merely the byproduct of racism, but more importantly the result of the sin of greed (which knows no color). Even CNN once acknowledged this before their descent into 24-7 fake news: “It was the Africans themselves who were enslaving their fellow Africans, sending them to the coast to be shipped outside.” These words were from African researcher Akosua Perbi of the University of Ghana who specializes in the study of indigenous slavery in Ghana.

Ghana launched “The Joseph Project” (named for the biblical story of Joseph sold into slavery) in a tourism campaign that coincided with its official apology for slavery. Emmanuel Hagan, Ghana’s Director of Research and Statistics, explained: “It’s something we have to look straight in the face and try to address, because it exists. So we will want to say something went wrong. People made mistakes, but we are sorry for whatever happened.” People tend to forget that slavery existed before the transatlantic slave trade in Africa and tragically continues today.

I’ve been writing about Juneteenth for years. Some politicians, though, have jumped on the #Juneteenth bandwagon as if just discovering the fact that our public schools and mainstream media do a poor job teaching accurate history. In my home state of Virginia, Governor Ralph Northam—a Democrat—has moved to make Juneteenth an official state holiday. This is the same individual who received a political pass on donning blackface or KKK garb (he couldn’t “remember” which costume he wore) back in med school. In Massachusetts, they’re moving to make Juneteenth a state holiday with Bill H.5141. Amusingly, Representative Maria Robinson (D-MA), told a state news outlet: “There’s been a blackout of Black history, African-American history in this country.” Yes. There has. Like the blacking out of the fact that the Democrat Party was the Party of Slavery, the Party of the KKK, the Party of Jim Crow, and today is the Party that celebrates limitless abortion (which is the leading killer in the black community). Dems fought to protect slavery, voted against the Republican-authored 1871 Anti-Ku Klux Klan Act (not one Dem voted for the bill aimed at stemming the violence of the terrorist group) and every civil rights bill (including the Republican anti-lynching bill) through the late 1950s, and fought to protect racist Jim Crow policies finally corrected by the Civil Rights Acts of the 60s (which resulted in the GOP voting in far larger margins than Dems).

And for anyone who wants to pretend there was some magical switch of the Parties, please see this excellent examination by African-American historian Dr. Carol Swain, former Professor of Political Science at Vanderbilt University.

We still desperately need emancipation—from ideological slavery. We have an opportunity to reject the race politics of the past and embrace a biblical worldview (Colossians 3:12-14) that unites us, regardless of ethnicity, socioeconomic status, or any other differences we devise for ourselves. The Mayor of Boston wants to have a famous statue of Lincoln removed, you know because “white supremacy.” How does a statue symbolizing the President who broke the shackles of institutional slavery get on the SJW hitlist? So “woke” but so blind. That Boston statue is a replica of the original one in Lincoln Park in D.C.—a statue paid for by freed slaves, mostly black Union veterans.

But the Left won’t let reality get in the way of their historically-challenged racial propaganda.

Frederick Douglass—a former slave, abolitionist, orator, journalist and presidential friend who helped reshape the conscience of Abraham Lincoln—would denounce any effort to purge the public sphere of the champion of Emancipation. His North Star newspaper was established to counter the prevailing false narratives of mainstream media. The tagline of his paper declared: “Right is of no sex, truth is of no color, God is the Father of us all, we are all brethren.” Amen!

Douglass, someone who actually was enslaved but refused to dwell in anger and unforgiveness, was the one who dedicated the Freedmen’s Monument in D.C. in 1867. His powerful speech, condemning wrath and violence, declared in part:

“…We, the colored people, newly emancipated and rejoicing in our blood-bought freedom, near the close of the first century in the life of this Republic, have now and here unveiled, set apart, and dedicated a monument of enduring granite and bronze, in every line, feature and figure of which the men of this generation may read, and those of after-coming generations may read, something of the exalted character and great works of Abraham Lincoln, the first martyr President of the United States.”

So, this Juneteenth let’s celebrate unity made possible because faith-filled men and women—of varying hues—refused to tolerate the sin of slavery. Truth overcame seemingly impossible obstacles to bring this nation the freedom it so desperately needed. And Truth is still needed for those, today, stripped of their personhood who cannot even cry out for their own freedom.