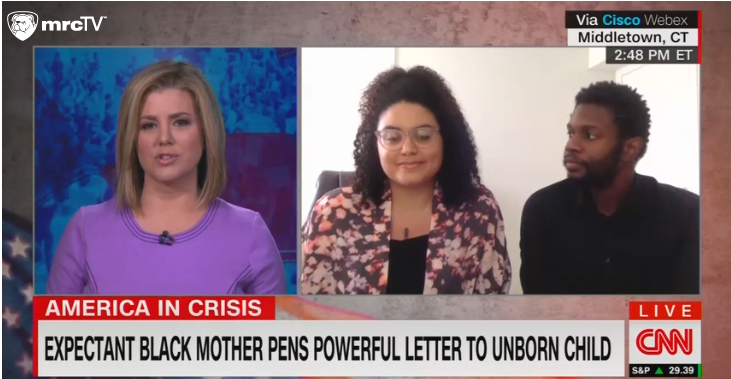 On Monday, CNN Newsroom produced a segment that ran afoul of approved pro-abortion talking points and phraseology. They actually called an unborn baby an “unborn baby” – not using a euphemism like “just a clump of cells” or even a fetus. But it’s ok, it was in service to the “Black Lives Matter” cause.

Host Brianna Keilar had on Ebony Chisholm, who had written an op-ed titled “A letter to my beautiful, black unborn baby” that ran in the Hartford Courant on June 12.

Keilar told of how “very moved” they all were at CNN by Chisholm’s open letter and asked her to read the entire 750-word piece on air, which she proceeded to do.

It began with a very PC, “To my unborn son, daughter or however you choose to identify…”

Chisholm went on to describe the development of her baby – shedding light on the humanity of the unborn to an audience that probably rarely gets that perspective:

I’m now in the beginning stages of my second trimester. During this time of pregnancy is when you’re beginning to move your arms and legs, you have all of your fingers and toes, your facial features are becoming more defined and my stomach is starting to become more noticeable. Your dad and I should be thinking about who you will look like more, when will we feel you kick for the first time, whether you are a boy or a girl.

Then she talked about her fears that “you or any black child could easily be another George, another Breonna, another Ahmaud, or any of the other hundreds of black men and women killed by law enforcement or white civilians.” The sad truth is, any black child in the womb has a far greater chance of being aborted than murdered by racists.

It has been said that the most dangerous place for an African American is in the womb. In 2014, 259,336 black lives were snuffed out before even being allowed to breathe – that’s more than the top 15 leading causes of deaths among African Americans combined. Black lives are also doing a disproportionate amount of the dying when it comes to abortion; though making up only about 13 percent of the population, 40 percent of the nation’s abortions are committed on African Americans.

Last week two African American pro-life Christian women were arrested for praying outside a Planned Parenthood in New York City and they drew the connection between Black Lives Matter and the injustice of abortion. One of them told Fox News:

“We’re black women but we do not support Black Lives Matter because they’re hand-in-hand with Planned Parenthood that kills African-American babies. They’re fraudulent hypocrites… and I believe all lives matter because God created them. There are thousands of George Floyds that die every day in their mother’s womb and it’s just as injust as when he died at the hands of that police officer.“

After Chisholm finished reading her letter, Keilar stated, “I think through so many of these conversations we’ve been having recently, thinking of children in all of this is something that really cuts through to a lot of people to understand, you know, that all of these folks we’re talking about are somebody’s baby, right?”

Funny how they don’t like thinking of children in the womb when it comes to abortion, though. Notice how a child is only an “unborn baby” when they can use it as a rhetorical device.