In a country where corporate liberal pandering to violent mobs is the new trend in business, one CEO decided to stand on principle and go against the tide.

MyPillow CEO Mike Lindell has refused to join companies like T-Mobile in pulling advertising from Fox News’s Tucker Carlson Tonight following Carlson’s rebuke of the leftist Black Lives Matter movement. Lindell told Newsweek: “’MyPillow is not changing its advertising. I make all my advertising decisions based on what is best for my customers and my employees.’”

Lindell said that “’MyPillow believes all lives matter and values all our employees and customers, treating them like family.'” Newsweek noted that Lindell’s “company is a major advertiser on Carlson’s show, with 45 airings between May 27 and June 9, according to iSpot.tv.”

Carlson dared to say of the Black Lives Matter movement during the June 8 segment of his show: “This may be a lot of things, this moment we’re living through, but it is definitely not about black lives.” Carlson continued: “[R]emember that when they come for you, and at this rate, they will.”

Such sentiment caused companies like “Disney, Papa John’s and T-Mobile” to pull their advertising from Carlson’s show, Newsweek noted.

Sievert also responded to another Twitter user who threatened to cancel his T-Mobile service if the company supported Carlson. Sievert even made sure to hashtag his support for the leftist movement and restated an earlier-made taunt: “Bye-bye, Tucker Carlson!” 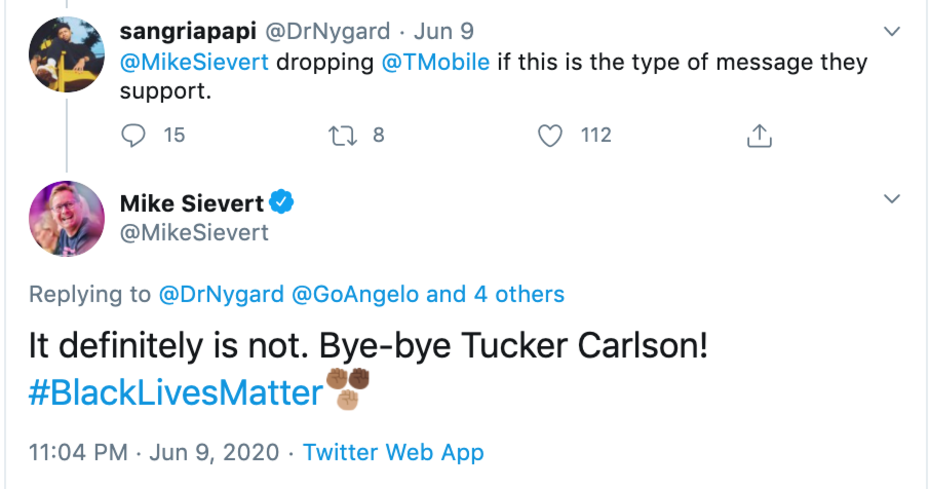