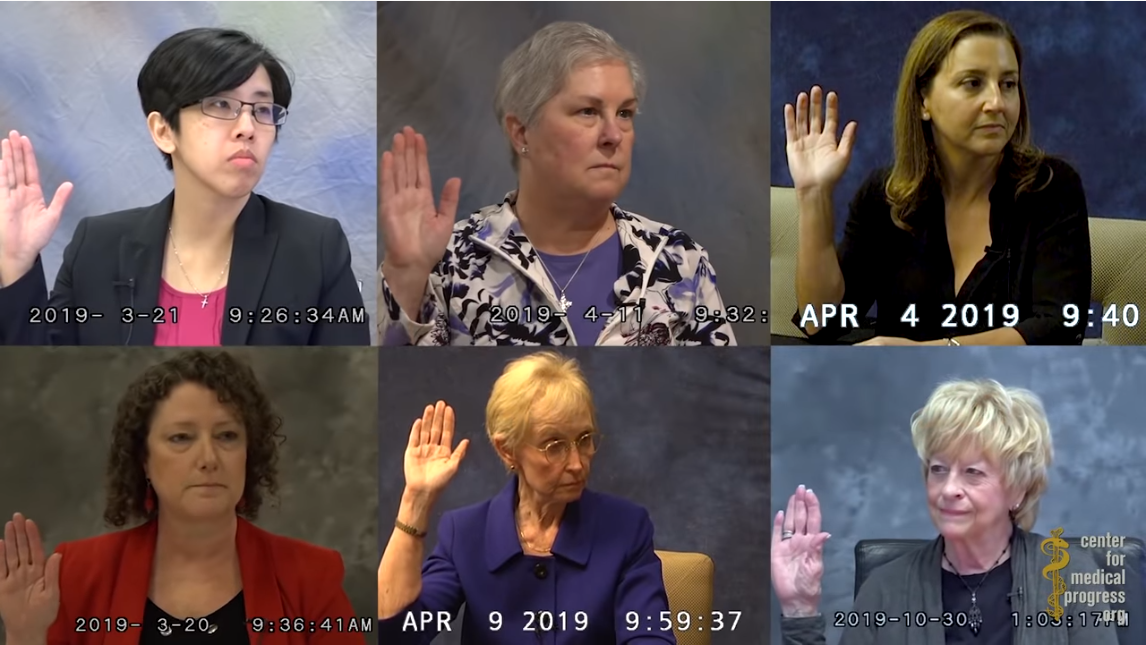 Fox News reported Tuesday that it had obtained footage from sworn depositions of Planned Parenthood staff in their lawsuit against Center for Medical Progress in which Daleiden’s attorneys questioned Planned Parenthood about their use of different techniques in abortions to preserve fetal tissue.

Planned Parenthood has publicly acknowledged that it was paid for fetal tissue but said argued it was within the law because the payments only reimbursed for costs. The organization has subsequently said they would no longer accept even reimbursements for fetal tissue provided for research.

“Last fall, a jury found David Daleiden and the Center for Medical Progress broke the law with their malicious campaign to advance their goals of banning safe, legal abortion, based on the same evidence they are now citing,” Planned Parenthood tweeted Wednesday.

“David Daleiden and CMP are STILL facing criminal charges for trying to prevent us from serving the patients who depend on us,” the organization said. (RELATED: Unsealed Invoices Show Planned Parenthood Billed A Tissue Company Nearly $25K For Fetal Body Parts)

Daleiden responded to Planned Parenthood’s comments with the tweet: “No, your hand-picked Judge Orrick, who founded your clinic in San Francisco, never let the jury see any of this evidence. But I will make sure that law enforcement and the public see all of it. #PPSellsBabyParts“

No, your hand-picked Judge Orrick, who founded your clinic in San Francisco, never let the jury see any of this evidence.

But I will make sure that law enforcement and the public see all of it.#PPSellsBabyParts https://t.co/o9g2Ct8CuN

Neither Daleiden nor Judge William Orrick, who has presided over Planned Parenthood’s lawsuit against Daleiden, immediately responded to requests for comment about this allegation.

Planned Parenthood Senior Director of Communications and Culture Erica Sackin told Fox News in a statement that Daleiden’s claims are “baseless, and coming from a group that’s been discredited time and time again.”

She added: “The truth is that the Center for Medical Progress broke the law to try and prevent Planned Parenthood from serving the patients who depend on us, and to shut down a provider of critical sexual and reproductive health care, including cancer screenings, STI testing, birth control and abortion care. They still face criminal charges, and were ordered to pay millions of dollars in damages as a result.”

Daleiden posed as a fetal tissue procurer and secretly recorded and published videos of Planned Parenthood employees in 2013 and 2014 allegedly discussing the sale of fetal body parts.

One of Daleiden’s first undercover videos allegedly depicted senior management at Planned Parenthood, Drs. Deborah Nucatola and Mary Gatter, talking about how they use a “less crunchy” technique to perform abortions when the mother has said she wishes to donate fetal tissue, according to Fox News.

In that video, Gatter allegedly joked that she wanted a Lamborghini while she negotiated fetal tissue rates, Fox News reported.

Nucatola and Gatter testifed in a deposition video reported by Fox News Wednesday that though they did not change their “procedure,” they did alter abortions. Nucatola testified that she would crush an unborn baby both above and below the unborn baby’s thorax in order to remove the tissue intact.

“You would do that as a general matter?” one of Daleiden’s attorneys asked in the video, according to Fox News.

“If I was aware that it was a donation case, yes,” Nucatola responded, adding that doing this was “not a change in the procedure.”

Gatter also discussed her “evolution” on how to obtain fetal tissue in the deposition videos obtained by Fox News. “By the time I was at PP [Planned Parenthood] Pasadena, many of us were moving in the direction of making this distinction between method and procedure, method and technique,” Gatter said in the deposition video. “And so I was very comfortable at that time that the difference in technique did not — doing different techniques: manual aspiration versus electronic aspiration — did not really affect the procedure or the method; so it was, therefore, permissible in terms of fetal tissue donation.”

Planned Parenthood did not immediately respond to a request for comment from the Daily Caller News Foundation.

Planned Parenthood said Daleiden’s undercover videos were deceptively edited and sued both him and CMP in March 2016.

“This removes beyond the shadow of a doubt the ludicrous idea that Planned Parenthood has any financial interest in fetal tissue donation – and shows the real agenda behind these attacks,” then-Planned Parenthood president Cecile Richards said at the time.