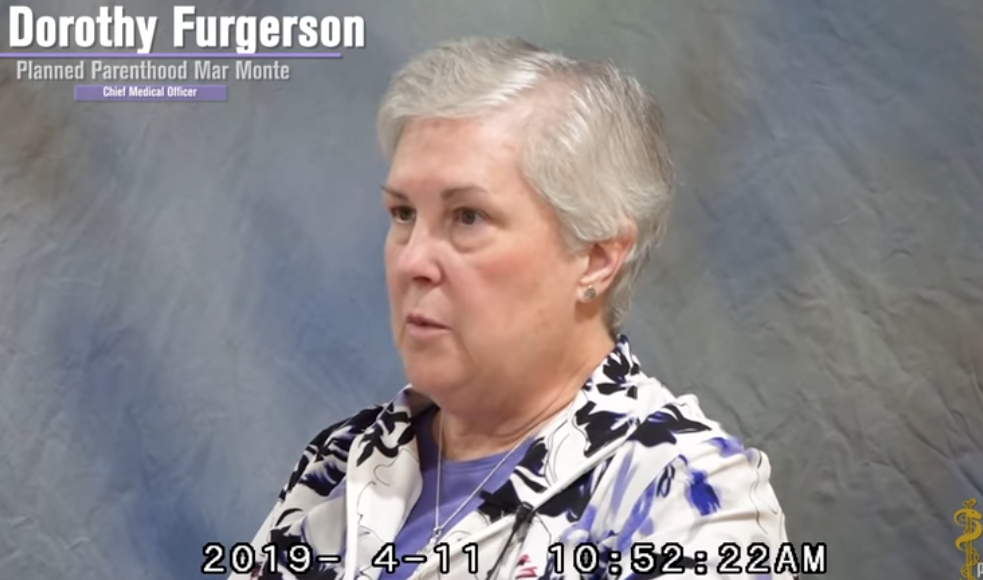 The video shows how Planned Parenthood Federation of America, while under investigation in 2015, told Congress that its Gulf Coast affiliate in Houston had “rebuffed” an undercover proposal to sell fetal livers for $750 per liver and $1600 for liver/thymus pairs. But Planned Parenthood Gulf Coast’s Senior Director of Abortion Access, Tram Nguyen, testified that she “wanted to move forward with it,” as documented in contemporaneous emails between her and PPGC’s Regional Director Dyann Santos.

The video also features sworn testimony from Dr. Dorothy Furgerson, the longtime Chief Medical Officer of Planned Parenthood Mar Monte, the largest Planned Parenthood affiliate in the country. Dr. Furgerson signed PPMM’s contract with StemExpress to sell fetal body parts to StemExpress per specimen “determined in the clinic to be usable”, and Dr. Furgerson’s endorsement appears on a StemExpress brochure handed out at National Abortion Federation meetings advertising “fiscal[] rewards” and “financial profits” to the abortion clinics who provided fetal tissue to StemExpress. When asked if the purpose of the brochure was “to obtain more potential sources of fetal tissue,” Dr. Furgerson testified, “Yes, I understood that that’s what they were trying to do.”

The video shows StemExpress paid Planned Parenthood solely based on the number of “usable” samples that StemExpress could harvest from PPMM’s abortions, at least an extra $65 per abortion if the customer ordered a fetal organ plus a blood sample. PPMM does over 17,000 abortions a year, and unsealed invoices show PPMM making $25,000 in just 3 months from StemExpress. When asked how much money an abortion clinic could make per year from selling fetal body parts, the founder and CEO of Planned Parenthood partner Advanced Bioscience Resources, Linda Tracy, was forbidden by her lawyer to answer.

The video also includes testimony from Dr. Deborah Nucatola, the Senior Director of Medical Services for PPFA from the first undercover video release. When asked when she first found out about Planned Parenthood affiliates “receiving payments for fetal tissue”, Dr. Nucatola testified, “I knew [Planned Parenthood Los Angeles] was getting payments because I was a provider there,” yet testified she never felt the need to check PPLA’s compliance with PPFA policies. Dr. Mary Gatter, the former PPLA Medical Director who established the relationship with “for-profit” biotech company Novogenix, testified that PPFA provided a “waiver” for PPLA to begin the program.

42 U.S. Code 289g-2 broadly forbids the exchange of valuable consideration for fetal tissue. After investigating Planned Parenthood and companies like StemExpress and ABR for over a year, the Senate Judiciary Committee and the House Energy & Commerce Committee’s Select Investigative Panel made criminal referrals for Planned Parenthood and their business partners to the FBI and U.S. Department of Justice.

In late 2017, the DOJ announced it had opened a federal investigation, and two southern California companies admitted guilt to selling body parts from Planned Parenthood Orange & San Bernardino Counties against the law in a $7.8 million settlement with the Orange County District Attorney.

CMP project lead David Daleiden notes: “The time has come for federal consequences for Planned Parenthood. Planned Parenthood lied to the public and to Congress, but now there is no longer any reasonable doubt that Planned Parenthood sold fetal body parts, commodifying living children in the womb and treating pregnant women like a cash crop. The U.S. Department of Justice must escalate the enforcement of laws against fetal trafficking to the highest level of priority.”

View the documents and testimony here.