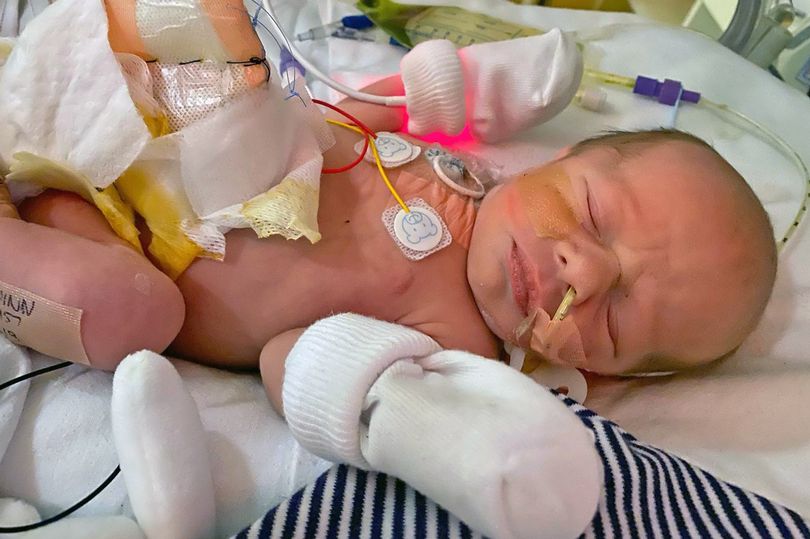 But the North Wales baby has fought through each trial and survived.

His mother, Sami Jo Quinn, told the Daily Star that 19-week-old Jesse is a miracle.

The family’s troubles began early in Quinn’s pregnancy. She said she had bleeding early in her pregnancy and feared she would lose her son.

Then, when she was 14 weeks pregnant, she said doctors discovered a problem with Jesse: His intestines were growing outside of his stomach, a rare condition called gastroschisis, according to the report. Doctors told her that the condition could be a sign of even more health problems, and they offered Quinn an abortion, the report continues.

“They told us the baby was at a high risk of complications in labour,” she said. “They handed us a booklet and told us that the condition is linked to heart syndromes such as Edwards Syndrome, a genetic disorder where the baby is born with a heart defect.

“But they wouldn’t be able to diagnose this condition until the baby was 28 weeks, and by then it would be too late to terminate,” Quinn continued. “They told us to consider aborting the baby because it might not survive. I felt crushed.”

But she and her partner refused after reading stories about other babies who had survived with similar conditions. Now she is glad that they did.

“… we wanted to give our baby a chance. I’m so glad I continued with the pregnancy. He’s doing really well and he’s truly a fighter,” she said.

A few weeks later, Quinn said she learned that she had almost miscarried Jesse.

“At my 20-week scan, the sonographer found a hematoma above my cervix that explained my earlier bleeding,” she said. “They told me that my body had tried to miscarry but failed. I was determined to keep the baby, but I was terrified. On every scan, we could see our baby’s intestines growing until they were the same size as him.”

The family received a spark of hope a few weeks later when doctors determined that Jesse did not have any heart defects, according to the report.

But their worries were renewed when, at 35 weeks, she noticed that Jesse had stopped kicking. At the doctor’s, Quinn said they discovered that her son’s heart rate was erratic. Doctors quickly induced labor and delivered her son in December 2019, the report continues.

“The baby was delivered crying, which was the biggest relief,” his mother remembered. “But he was whisked away before we could hold him.”

Just 10 hours after he was born, Jesse underwent surgery to fix his intestines. A short time later, he had a second operation, his mother said.

In January, doctors deemed the little boy well enough to go home. But just a few days later, Quinn said she woke up to see her son vomiting blood and fecal matter.

“After everything, I thought I was going to lose him,” she said. “He was in ICU for 1 week, fighting for his life.”

But again, Jesse pulled through.

Months have past, and Jesse now is 19 weeks old. His parents said he is doing well at home, and his surgical scars are fading.

“He’s my miracle baby and I’m so glad he survived,” his mother said.