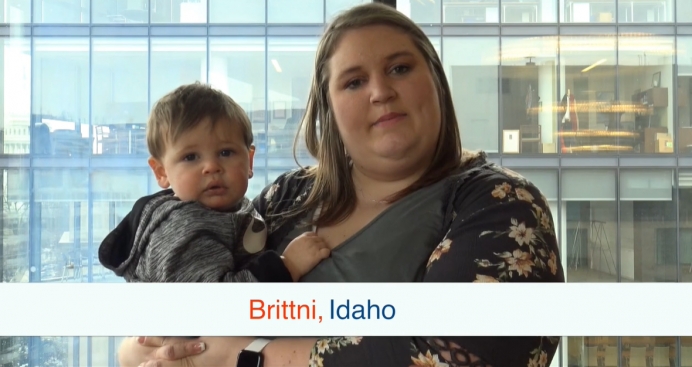 A life-saving collaboration that’s been a year in the making came to fruition for unveiling at Heartbeat International’s Annual Conference Wednesday.

Brittni, an Idaho mom to young son Brantlee, and client of the Reliance Center in Lewiston, will receive financial support for continuing in her education from the Unplanned Movie Scholarship.

The award was a surprise to Brittni, who still expresses emotion a year-and-a-half after the birth of her son when sharing her journey to choosing life for him with the Reliance Center’s help and support.

Brittni has been working two jobs and going to school while parenting 18-month-old Brantlee. She has said she most likely wouldn’t have her son without the Reliance Center.

Heartbeat and Bratcher have been working together for about a year on the scholarship to honor women who have chosen life for their babies and who want to go back to school or pursue a degree.

“She really embodies everything that we hope this scholarship will reward,” Bratcher said of Brittni. “She is courageous, she is kind, she is hard-working, and we want to celebrate with her.”

The scholarship came about because Bratcher wanted to help young mothers after hearing heart wrenching accounts of women feeling they had to choose between giving their children life and pursuing an education.

“I felt like we have a simple problem to solve,” Bratcher said in her message for the scholarship’s award to Brittni. “And that there are young women who want to go to school or finish their degree.”

Addressing this thought with Brittni in particular, she said, “You face a lot of hardships as a young mom, and I know that.”

She learned after taking the role that her mother had come close to aborting her. Bratcher’s mother informed her of this in an emotional conversation with her after the filming of Unplanned had begun.

The actress said it was courageous for her mother to have her, and for her to share the details about what had happened with Bratcher. Bratcher has spoken publicly as well about her own unplanned pregnancy as a young, single, out-of-work woman, and the blessing her now 10-year-old son has been for her family’s life.

“So, we put together a scholarship and we wanted to reward women who have been courageous in choosing life,” Bratcher said recounting the scholarship’s creation.

Lawless and the Reliance Center worked behind the scenes to arrange the remote presentation, and was able to assemble Brittni for a video call with Bratcher and Boston-Billota without Brittni knowing what was to come.

“You know we love you, and we’re so proud of you, right?” Lawless told Brittni on camera. “And you’re working so hard to give Brantlee a good life. And we are just so proud of you.”

“So, Heartbeat International and Ashley Bratcher have awarded you a scholarship,” Lawless continued, explaining to Brittni that she would have $7,500 in assistance with continuing her education from the Unplanned Movie Scholarship.

Brittni cried and expressed gratitude through her tears.

All involved in the presentation were moved with emotion.

“Brittni you are our first recipient,” Bratcher began, before pausing, “… and I’m crying over here too, so you’re not alone!”

“We just wanted you to know, you represent everything that we want this scholarship to embody,” Bratcher said. “You have worked so hard and you’ve faced so many challenges to get to where you are.”

“And you’re doing the work,” said Bratcher. “You’re pushing forward. You love your son. You’re working hard, and you’re exactly the kind of woman that we want the world to see as a role model. Because you’re doing everything you can to be the best mom that you can be. So, we’re really, really proud of you, and really, really excited to give you this scholarship.”

Boston-Bilotta recalled Brittni’s journey with Heartbeat this past January to Washington D.C. for Heartbeat International’s Babies Go to Congress, when moms and the pregnancy help centers who’ve assisted them meet with lawmakers on Capitol Hill for the moms to share their stories, illustrating how pregnancy centers are good for America.

“You represent the women that we know are out there that are making those choices,” she told Brittni. “And they’re doing it because of the help of Heartbeat International’s pregnancy help network. “You’re one great example, and for every one of you there are thousands of women that are also doing what you’re doing.”

Boston-Billota highlighted the difference pregnancy help organizations make in women choosing life, by providing the support that they do for women. Because of this, she said, women can achieve their goals and still be mothers.

“You don’t have to lose your dreams and goals,” she said. “You can attain the things you want to attain if you’ll surround yourself with the assistance and the love that’s provided at a pregnancy help organization.”

“So today, Heartbeat stands with you,” Boston-Billota told Brittni. “We’re so proud of you. We know you have a promising future and we know you are already giving back.”

“It’s been an honor for Heartbeat to be a part of the Unplanned Movie Scholarship and to partner with Ashley and to make that possible for you,” she added, then applauding the Reliance Center and its work.

Brittni received assistance from the Reliance Center beginning when she was eight weeks pregnant. She attended the 12-week Embrace Grace program offered there, along with mentoring and parenting classes; the latter provided for Brantlee’s father as well. The Reliance Center also helped Brittni with such as her rent, electric bill and daycare.

Now Brittni has a full-time job, a part-time job, she attends school full-time, she is scheduled to graduate in the spring of 2021, when she is also engaged to be married. She remains moved by the help she received from the center.

Bratcher offered a special thanks to the Unplanned Movie Scholarship’s donors.

“I want to say thank-you to all of our donors who are making this scholarship possible, it wouldn’t be possible without you,” the pro-life actress said. “And I bet you are just as touched as we are by seeing Brittni receive her scholarship.”

“So, thank you from the bottom of my heart,” said Bratcher. “It means the world not only to us but to every single woman that you’re giving and opportunity to.”

Bratcher also expressed gratitude for the chance to support Brittni and collaborate with Heartbeat and the Reliance Center.

“What and incredible honor and privilege it is to connect with Brittni and with other women all across the world, to be connected with Heartbeat International who is serving those women, all of the affiliate centers like the Reliance Center who are serving women like Brittni,” she said. “Brittni we are so proud of you; we can’t say that enough.

“We are very excited to watch you continue on your journey,” Bratcher said. “We know that you’re going to do great things, and we just can’t wait to see what it holds for your future.”

Support for the scholarship can be made through Unplannedmoviescholarship.com.