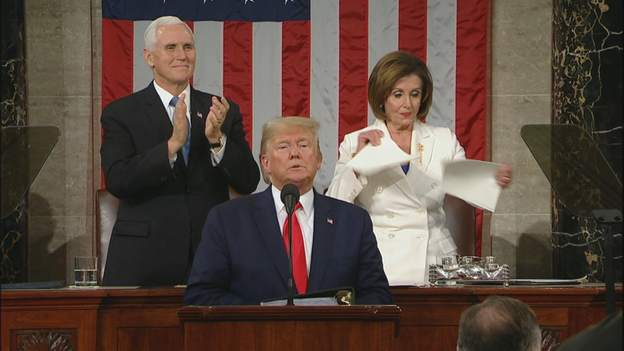 Nancy Pelosi’s childish antics aren’t going to be allowed to rest. Her ripping up the pro-life State of the Union address President Donald Trump gave on Tuesday night has earned her an ethics complaint filed by pro-life Congressman Matt Gaetz.

President Donald Trump used his State of the Union speech last night to call for protecting babies from late-term abortions, and he celebrated the gift of life by honoring a girl born so prematurely doctors didn’t know if she would survive.

The president also celebrated jobs for Americans including women and minorities, thanked a soldier & his family for their service, honored a young boy and his educational pursuits, and asked that God bless the United States and provide it His grace.

Apparently that was too much for pro-abortion Speaker Nancy Pelosi to handle — so she ripped up the transcript of Trump’s speech to shreds and laid in on the desk in front of her.

“I will be filing charges against Nancy Pelosi in the House Ethics Committee. She disgraced the House of Representatives, she embarrassed our country, and she destroyed official records. The law does not allow the Speaker of the House to destroy the records of the House. The rules of the House do not permit some little temper tantrum because you don’t like what the President of the United States says,” he said.

“You know what? A lot of Republicans are sick of the double standard here. When Joe Wilson made a comment and excited utterance, oh, the Democrats really brought the heat down on him — when he said that Obama lied about illegals getting healthcare under Obamacare. By the way, Joe Wilson was right. We’ve got to apply the same standards to the Democrats that they want to apply to us, and there will be an ethics investigation into Nancy Pelosi. We will start the ball rolling to have her censured. The first act begins tomorrow when Congressman Zeldin and I will join Kay Granger in a censure resolution, and we will force a vote on that resolution,” he added.

Pelosi’s actions are coming under fire — even from the liberal media. As one CNN writer reflected, “It was unprecedented behavior for a speaker, aggressively rude and unapologetically meant to rile up her base.” Her actions even produced a twitter hashtag derided the shredding: #PelosiTantrum

Fox commentator Jason Chaffetz said “I have never seen anybody act so childish in my life.”

Pro-life Vice President Mike Pence sat next to Pelosi during the address and he said he believed Pelosi planned all along to shred the speech.

“It felt like it,” he said during an interview on Fox and Friends. Pence said Pelosi’s action “really dishonored the moment and was beneath the dignity of the Joint Session of Congress.”

“I wasn’t sure if she was ripping up the speech or the Constitution,” he added.

In a statement afterwards, Pelosi defended the tear.

“The manifesto of mistruths presented in page after page of the address tonight should be a call to action for everyone who expects truth from the President and policies worthy of his office and the American people,” Pelosi said.