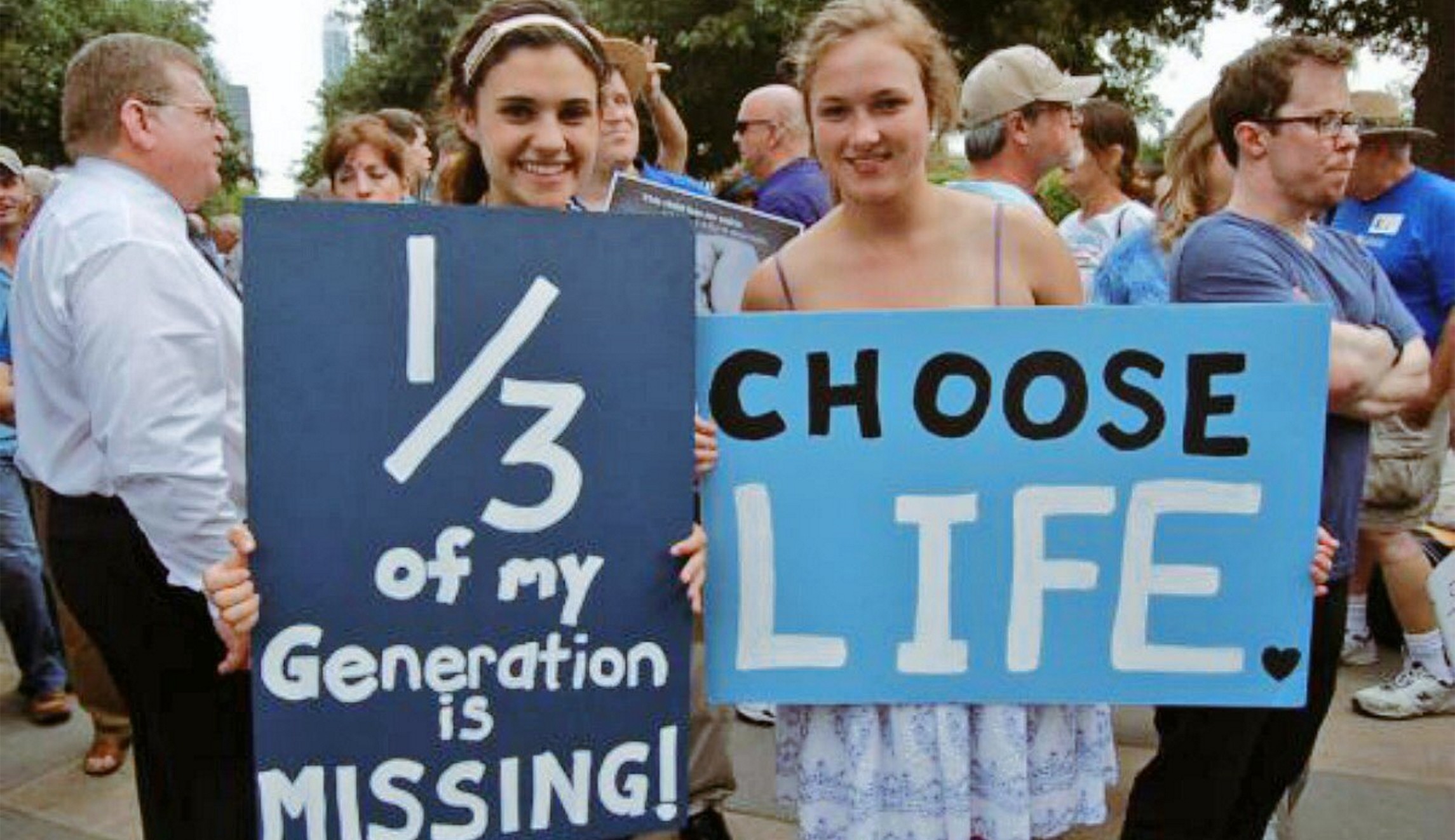 College students throughout the United States will take bus trips up to 24 hours long as they head to the nation’s capital to “bring awareness to the horrors of abortion and the beauty of life.”

Many college students who are preparing to go to the March for Life on Friday face at least a full day of traveling on a packed bus for a short trip — but they said they could not be more excited.

The Daily Caller News Foundation spoke with students and leaders at Christian colleges and universities across the country who described how students are willing to make sacrifices and take initiative to make sure they get to the 47th annual March for Life.

Students are coming to the March for Life all the way from Benedictine College, a Catholic liberal arts college in Atchison, Kansas. Freshman politics major Bernadette Hassan and her boyfriend, sophomore architecture major Ian Reilly, will both make the 24-hour bus ride together from Kansas to Washington, D.C. It’s about 18 hours away without stopping.

Hassan has attended the March for Life since she was a baby in her mother’s arms, she told the DCNF.

Hassan said that by attending the march, she can show support for both a mother and her unborn baby.

“I am attending the March for Life to end the culture of death and to be a witness to what it really means to be pro-woman,” she said.

The Benedictine freshman said attending the March for Life for so many years in a row might seem tedious to some, but she is “more than happy” to stand in the cold if she has the opportunity to “just change one heart.”

Reilly has also gone to the march for many years. This will be his second year attending the march as a college student with Benedictine, and he said college students have a much stronger voice than many realize.

The sophomore architect major said college students will determine what culture looks like for the future, and that it is the duty of every man to be a protector of “those who can’t protect themselves.”

“Abortion is an evil that claims millions of lives and disregards human dignity on many levels, and it will always exist in our country unless young Americans, both men and women, speak out against it,” he said.

The University of Notre Dame’s Center for Ethics and Culture provides transportation and travel grants for hundreds of students and faculty to attend the March for Life every year.

“Every January, hundreds of Notre Dame students make the 15-hour trip to the nation’s capital, where they join hundreds of thousands of participants to mark the anniversary of Roe v. Wade, pray for an end to abortion, and serve as joyful witnesses to the sanctity of all human life,” according to the university’s website.

More than 1,100 students, faculty and staff participated in the 2018 March for Life. University president Fr. John I. Jenkins did not respond to requests for comment from the DCNF as to how many students are projected to attend in 2020.

Economics and applied computational math major Andrew Lege will take the long bus ride to attend the March for Life. Being Catholic means being pro-life, he told the DCNF, and the pro-life movement is the “most important cause in the world.”

“As a Catholic, I have always been pro-life, but never felt as if I could do anything to change people’s hearts,” he explained. “The March in D.C. gives me the opportunity to speak up for the persecuted humans both inside and out of the womb.”

“I think it is time to become more aware of how horrible abortion is and fight for all marginalized people from conception to natural death,” the Notre Dame junior said.

Christendom College will send almost the entire college to the March for Life, according to president Timothy O’Donnell. The Virginia college is a conservative, Catholic liberal arts college nestled in the heart of the Shenandoah Valley a little over an hour from Washington, D.C.

O’Donnell told the DCNF that Christendom encourages all students to attend the march, to give witness to their faiths, and to stand up for the rights of unborn children. Nine or 10 buses will carry about 500 students from Front Royal to Washington, D.C., O’Donnell said. Many alumni and their families will meet the group from Christendom in the city and march with them.

“Standing up for the sanctity of human life by participating in the march is a great moment for our students to manifest concretely, through their actions, what they have learned in the classroom and help fulfill the college’s motto, ‘To restore all things in Christ,’” O’Donnell told the DCNF. “It has been an honor and a grace to participate in the march, which is a powerful witness in defense of God’s precious gift of unborn children.”

Freshman Fiona Briggs said she will come with Christendom College to march Friday in order to “serve witness to the truth that every life is precious, from conception to natural death.”

“When I go to the march I am moved by the number of people who gather together to support the right to life,” she explained, adding that she is especially impressed by “college students whose voices are so powerful and who are the future leaders of society.”

“It is crucial for colleges and young students to attend the March for Life,” she told the DCNF.

Castellon said America must “see and acknowledge” the strength that the pro-life movement has within her generation — a strength she said is only “growing stronger.”

“Being a part of this movement is so important to me,” she said. “I feel honored to be a witness to the unborn and hopeful that very soon we will see a change in their favor.”

Fr. Dave Pivonka, the president of the Catholic Franciscan University of Steubenville in Ohio, will join the university in sending about eight buses filled with roughly 450 students to Washington, D.C. Pivonka added that this does not account for all the students and alumni who will attend the March for Life.

“We have literally hundreds more who will drive themselves, who will go and spend time with family in the area,” he told the DCNF. He predicted Franciscan University will be represented by upward of a thousand people Friday.

Freshman Clay Boyle, a Theology and Philosophy double major, told the DCNF he will be attending the March for Life with his friends and fellow students from Franciscan University.

The New Orleans, Louisiana, native said he will be marching to “give a voice to the voiceless, to stand up for the countless lives lost to abortion, to stand up for those who have lost motherhood and fatherhood, and to bring awareness to the horrors of abortion and the beauty of life.”

“The March for Life is one of (if not the) most profound statements made by the pro-life community,” he said. “I am proud to say that this will be my fifth year participating.”

The university will cancel classes for all students Friday so all may attend the March for Life, Pivonka explained. It makes sense on a practical level, the priest said, but added that “it is also another way that we as a university can make sure that our students and our faculty and staff have every opportunity to go to Washington and stand up for what’s ultimately most important in this world.”

Pivonka and O’Donnell noted that the students, alumni, and family traveling from across the country to attend the March for Life will rendezvous at The Dubliner, a popular D.C. pub located by Union Station where Catholics attending the March have met up for years. Here they will refresh themselves and reunite with old friends they might have not seen since college, O’Donnell explained.

Freshman Ruthie Himpler will also attend the March for Life with Franciscan University, but she plans to drive down with her friends since her family lives in the area.

“I think it’s abundantly important that every single pro-lifer should go!” she told the DCNF. “Seven of my cousins and two of my grandparents were adopted and to think that any of them or any of the several adopted people I know wouldn’t be in my life because of abortion is heartbreaking. I’m marching to support all their mothers for letting them be in my life.”

The business and marketing major added that as a female college student, she has seen the pitfalls of the hookup culture and its effects on women. She has also seen friends go through with abortions.

“I have friends who have gone through with abortions and they believe it was the worst decision they ever made,” she said. “I’m marching so girls know that it is never the right or healthiest decision and it will haunt their life despite what media tells them.”

Many students from the private Christian evangelical school Liberty University will make the trek, which is over three hours long, from Lynchburg, Virginia, to Washington, D.C.

Ryan Helfenbein, executive director for the university’s new Falkirk Center for Faith and Liberty, told the DCNF the university plans to send about 200 students to the march by bus.

“These are students who are volunteering to come,” he explained. “It’s out of their own free volition. They want to be involved. It’s largely students taking initiative.”

Liberty students who go to the March for Life are “motivated by the care and concern for the unborn and for mothers who are in crisis,” the Falkirk Center executive director said.

“This taps into the understanding of Amago Dei, of creation,” he added. “All people have inherent dignity and worth, even those we cannot see. Students today are very much conscious and very much aware of the pro-life cause.”