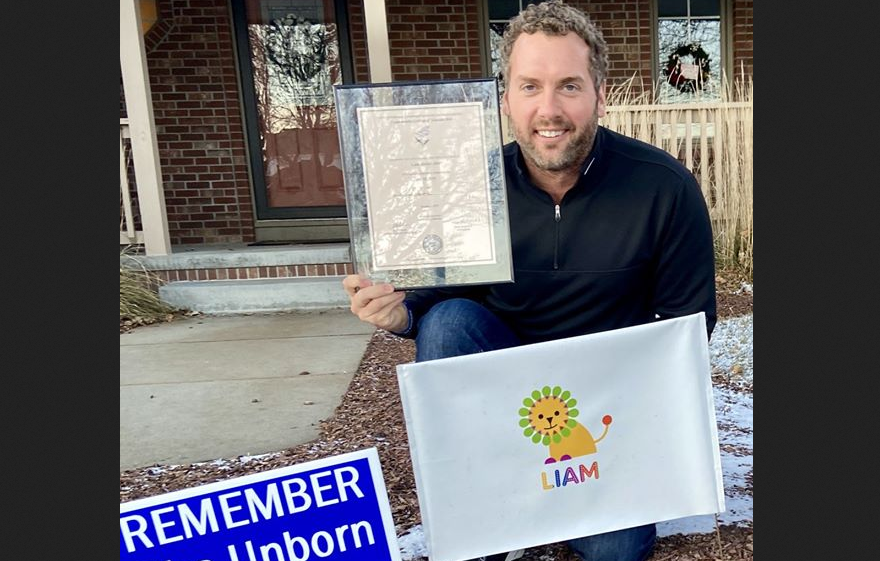 In a historic act of compassion and justice the Nebraska State Department of Vital Records refused to deny my aborted baby Liam Michael Allen a Certificate of Non-Viable Birth because he was aborted.

On December 5th, 2019 in Lincoln, NE, I was handed this healing certificate, officially recognizing Liam and archiving his existence within state records. Having met all the statutory requirements of NE Statue 71-607 (NE LB 1040), accept that Liam was aborted not miscarried, Vital Records chose to do the right thing and approve the application.

The moment I was handed the certificate I felt an immense wave of healing. My aborted baby, had just taken a step toward personhood and been elevated to the same status as a miscarried baby.

My rights were utterly overwhelmed by Liam’s mother in the fight for his life. I put up every legal and sane roadblock to save my child’s life. Untimely, Liam was violently dismembered by notorious abortionist LeRoy Carhart’s and discarded as medical waste. After Liam’s death on July 18th, 2019 at the Carhart abortion facility in Bellevue, Nebraska I began to discover my rights to even memorialize my child were being overwhelmed.

I had no rights to Liam’s remains, ultrasound photos, and no right to even obtain any verification that the mother had completed the abortion procedure. She was witnessed entering the abortion facility on July 18th but as a grieving father I had no right to verification of Liam’s death. The supreme court has ruled that notifying fathers of an abortion is an undue burden on mothers. Part of the grieving process is denial and denial haunted me for weeks following the abortion until is was abundantly clear the mother was no longer pregnant.

About a month after Liam’s abortion I wanted to honor his life with an obituary in the Omaha World Herald. In an act of editorial cruelty, the Omaha World Herald refused to print Liam’s obituary because he was aborted and didn’t have a death certificate. I pleaded with the newspapers executive staff for days but they steadfastly refused to print my aborted baby’s obituary without a death certificate.

Shortly, after the obituary denial I learned of the uniqueness of Nebraska law. Nebraska provides state-issued commemorative “non-viable birth certificates” for miscarried children passing away prior to 20 weeks gestation. Nebraska is the second state in the country to offer this type of certificate, but the first to do so without requiring a minimum gestation and also making it retroactive. When I first learned of this, I immediately wanted a non-viable birth certificate or “death certificate” to honor Liam. Unfortunately, Nebraska law carefully excludes the aborted from receiving these certificates because they are “intentionally demised”.

Immediately after reading that the aborted were excluded from receiving certificates I asked myself “what is the legal difference between a deceased miscarried baby and an aborted one”? The justifications for the certificate law were to give dignity to the lost life and help grieving families heal. This begged the question why can’t aborted babies receive the same dignity and aren’t post-abortion parents in need of healing too?

In early October 2019, I joined forces with Dr. Pat Castle founder and director of LIFE Runners and we started an effort to get the Nebraska law expanded to aborted children. We reached out to the media and began telling my story of the obituary denial and my desire to get the Nebraska law expanded. Throughout November we met with several lawmakers in Lincoln, NE. Every lawmaker we met believed our effort had merit. But our effort started too late for the legislature to take action with the session opening in early January 2020.

Having met all the verification requirements of the law on December 5th, 2019 I was handed Liam Michael Allen’s Certificate of Nonviable Birth. Holding Liam’s certificate, felt like my aborted baby had taken a historic step to becoming one of the first officially state documented victims of this holocaust that is abortion. We believe Liam to be the 6th aborted baby to be granted a certificate of non-viable birth.

Overjoyed, on December 10th, 2019 I publicly announced on Liam’s Facebook page that the state office of vital records was issuing non-viable birth certificates to the aborted and displayed Liam’s with the mother’s name redacted. I was offering to help any Nebraska resident port-abortion parents obtain a certificate. Just two days after publicly announcing Liam’s certificate, I received a phone call from Jeannie Pittman in tears. The vital records office had contacted her and said that Liam’s mom pressed numerous state officials and pointed out to them that the aborted are to be excluded from NE Statue 71-607. This pro-abortion lobby of one had successfully halted the issuing of these life affirming certificates to the aborted.

I was in total shock when I heard that news. All I could think was why would Liam’s mother possibly care about this? She got what she wanted when she had Liam expelled from his sanctuary. It felt like abortion 2.0. Those of us who worked tirelessly to achieve this right for the aborted had to call our network of post-abortion healing groups and post-abortion mothers who were applying for the certificate and let them know the certificate was no longer available. Regardless of Liam’s mother’s motives, she clearly demonstrated a separate law is needed for post-abortion healing certificates.

There was a another wound on December 20th, 2019 when I signed for a certified letter form the state office of Vital Records requesting that the certificate of non-viable birth issued to Liam be returned to the vital records office. The letter states it was issued in error and they would refund my application fee once returned. My reply to the state was as follows: “I appreciate your offer to refund my money. However, I will be keeping my certificate as it has great healing value to me because it recognizes Liam’s brief life mattered. From my standpoint it was not issued in error.”

To date, I’m still awaiting a reply from state officials. It will take nothing short of a subpoena for me to return Liam’s certificate. Despite the setbacks we continue to fight for this change in Nebraska law and view these certificates as an important step toward personhood.

LifeNews Note: Brad Allen is the father of Liam Michael Allen, a baby who was killed in an abortion despite his objections.