Just one day after CNN settled with pro-life teen Nick Sandmann for smearing his name, the Covington students are getting attention about their own lawsuit against other abortion advocates and liberal media types who lied about him and his friends.

The lawsuit targets Reza Aslan, the disgraced former CNN commentator who called Nick’s face “punchable” in a tweet that he finally deleted yesterday after getting served with the lawsuit. Aslan’s tweet from January 19, 2019 features the now viral image of Sandmann and asks his followers: “Have you ever seen a more punchable face than this kid’s?” 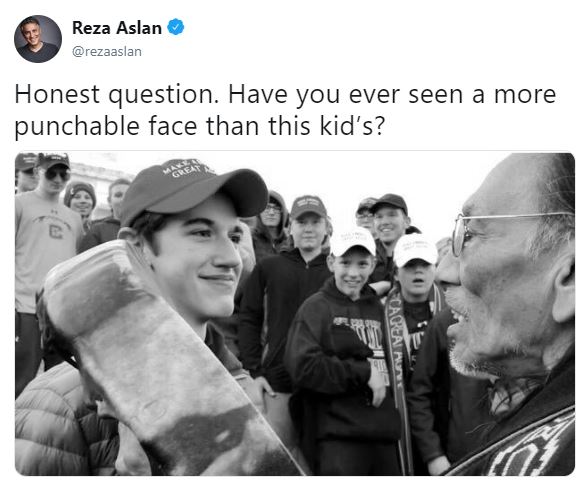 “According to the lawsuit, the tweet calling Sandmann’s face ‘punchable’ further spread the false narrative that the Covington Catholic boys had aggressively insulted the Native American man, when that was not the case,” it writes. “The lawsuit, which Barnes provided to PJ Media, would slap Aslan with a minimum of $135,000 in damages.”

“False and Defamatory Accusations against the plaintiffs are defamatory per se, as they are libelous on their face without resort to additional facts, and as clearly demonstrated here, [the plaintiffs] were subjected to public hatred, contempt, scorn, obloquy, and shame,” the lawsuit argues. “The conduct of the plaintiffs, based on the false facts the defendants placed and circulated into the court of public opinion, led to these lifetime labels on these minors: ‘display of hate, disrespect and intolerance’; ‘heartbreaking’; ‘decency decayed’; ‘racist’; ‘cried for America’; ‘infamous’; ‘gall’; ‘shameful’; ‘darker chapters’; compared to genocide; ‘laughing and egging on’ ‘hurtful’ behavior; ‘awful’; ‘cavemen gestures’; ‘taunting’; ‘harassing’; ‘stalking’; ‘mocking’; ‘bullies’ who should be doxed, ‘named and shamed’, expelled from school, denied admission to college, be punched in the face, and their lives ruined.”

UPDATE: This article to has been updated to reflect that the lawsuit has not been filed on behalf of Sandmann himself.