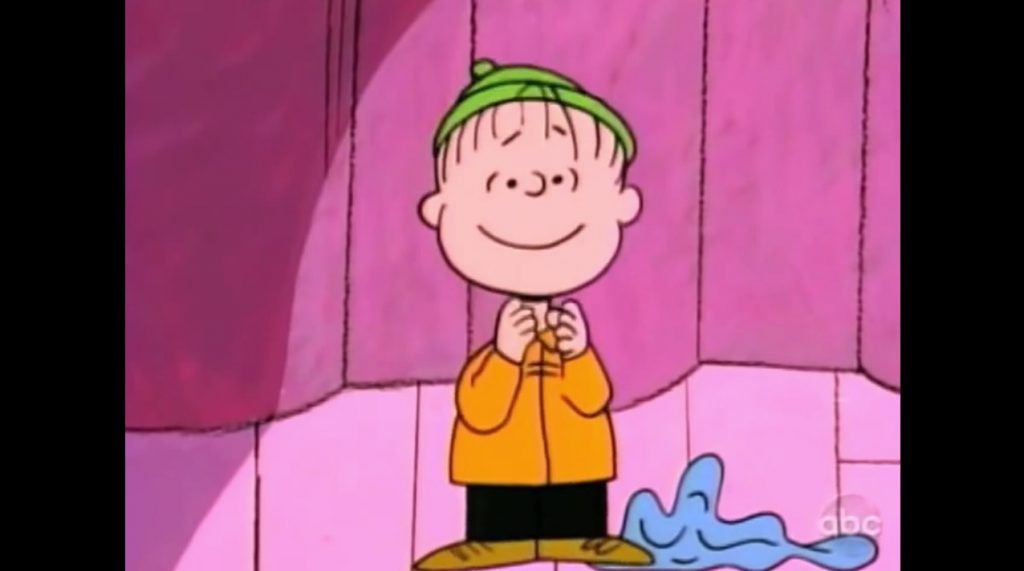 Charles Schulz, the award-winning creator of the Peanuts comic strip going back to 1950, was a devoted Christian who included the gospel in more than 560 of his 17,800 creations. One of the most recognizable examples of his theological messages is packaged in A Charlie Brown Christmas television special that has aired annually for 54 years.

On December 9, 1965, A Charlie Brown Christmas first appeared on television screens at 7:30 p.m. ET throughout America. The special was a collaboration between Schulz, producer Lee Mendelson, and director Bill Melendez, with a music score by Vince Guaraldi. The reviews were outstanding. In fact, Washington Post TV critic Lawrence Laurent wrote, “Good old Charlie Brown, a natural born loser … finally turned up a winner.”

Ironically, CBS executives thought a Bible reading might be a turn-off to viewers. The next year, one of Time magazine’s most famous covers, “Is God Dead?” was featured on April 8, 1966. It was a cover story for a previous article from October 1965 investigating a trend among 1960s theologians to write God out of the field of theology. The 1966 article looked in greater depth at the problems facing modern theologians, in making God relevant to an increasingly secular society. But Charles Schulz proved them wrong.

In the television special, Charlie Brown is frustrated by the commercialization of Christmas. His dog Snoopy wants to win a holiday decorating contest. His sister Sally is anxious about receiving her “fair share” of presents. His friend Lucy wants real estate. In an attempt to get in touch with the real spirit of Christmas, Charlie Brown picks out a small, struggling tree instead of a shiny aluminum one. But his friends only laugh at him.

The otherwise mature and thoughtful Linus is known for his ever-present security blanket. Throughout the history of the Peanuts, he refuses to give up whenever the other characters try to take it away. However, in his quest to explain the true meaning of Christmas to Charlie Brown, Linus recites the story of Jesus’ birth directly from the Gospel of Luke. When he shares “what Christmas is all about,” Linus quotes Luke 2:10, “The angel said to them, ‘Fear not, for behold, I bring you good news of great joy that will be for all the people.’”

When Linus says the words, “fear not,” he drops the security blanket.

After Linus finishes his speech, he picks up the blanket. But this time, he lays it down forever at the base of the Christmas tree as an analogy to leaving it at the foot of the cross. Then the Peanuts gang worships God as they sing, “Hark the Herald Angels Sing, Glory to the Newborn King.” The obvious song choice could have been “O Christmas Tree,” the notes of which have already been playing gently in the background. But the focus is not the tree. The focus is Christ. Linus proclaims and demonstrates the true freedom and security that only Jesus can give. The Peanuts gang have moved from speaking and hearing truth to responding, much like those shepherds who were instructed to “fear not” years ago.

Despite opposition, Schulz was also determined to “fear not” regarding having the gospel message included in A Charlie Brown Christmas.

In 1965, Schulz got pushback from producers and executives at CBS about using the Gospel of Luke Scripture text in the television special. When Schulz, a Sunday school teacher, said Linus should recite from the Gospel of Luke, both producer Lee Mendelson, and director Bill Melendez did not agree and tried to convince Schulz otherwise. Mendelson said, “We looked at each other and said, ‘Well, there goes our careers right down the drain. Nobody had ever animated anything from the Bible before, and we knew it probably wouldn’t work.’ We were flabbergasted by it.”

Mendelson even suggested that a laugh track would save the show, and Schulz responded by standing up and walking out of the room. Melendez told Schulz (whose nickname was Sparky), “Sparky, this is religion. It just doesn’t go in a cartoon.” But Schulz had a simple response: “Bill, if we don’t do it, who will? We can do it.”

Of course, the Scripture stayed in the special and a multitude of viewers who treasure this moment are glad it did. In fact, the show won a Peabody and an Emmy Award, and CBS immediately ordered four more specials.

Liberty Counsel Founder and Chairman Mat Staver said, “During this time when our religious freedom is threatened in so many ways, Charles Schulz’s courage in writing A Charlie Brown Christmas is a great reminder that we must share the gospel despite opposition. And this simple but profound animation created in 1965 continues to live on as an inspiration for us to seek true peace and security in Jesus Christ. Like Linus, who laid down his security blanket at the base of the Christmas tree, so we too can lay down our fears and insecurities at the foot of the Cross,” said Staver.