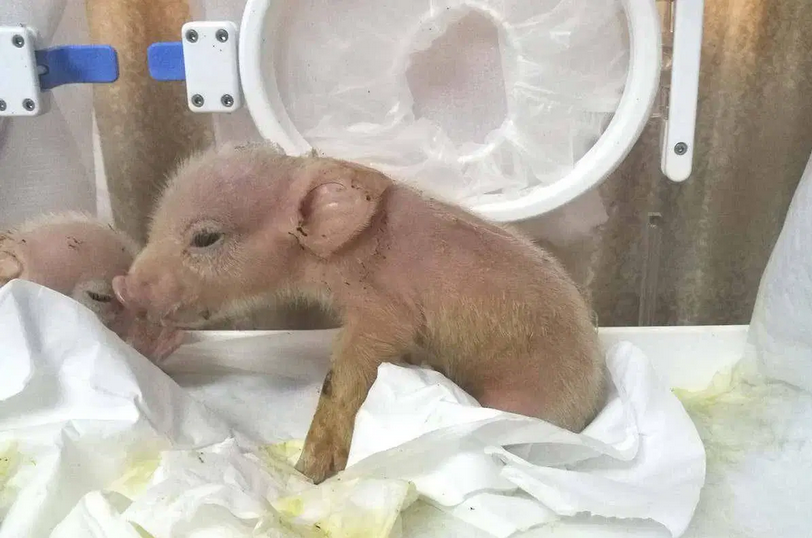 Scientists announced this week that they successfully created the first monkey-pig hybrid, in a controversial research project teeming with ethical issues and concerning questions.

Chinese scientists at the State Key Laboratory of Stem Cell and Reproductive Biology in Beijing announced the birth of the first pig-monkey chimeras. The researchers modified monkey cells and laced them with a fluorescent protein that allowed them to trace the cells and the cells they produce. The scientists then obtained embryonic cells from the genetically modified cells and injected those monkey cells into pig embryos days after creating them in the lab.

Some 4,000 monkey-pig embryos were implanted and all of them died except for 10 monkey-pig piglets who were born. Of the 10, two of them turned out to be “successful” chimeras with attributes of both animals but only a tiny part monkey. Their heart, liver, spleen, lung, and skin contained one in 1000 and one in 10,000 of monkey cells, according to the scientists.

The point of the controversial experiments is to supposedly eventually create human organs for transplant. The researchers said in their paper, published in Protein & Cell: “Blastocyst complementation by pluripotent stem cell (PSC), injection is believed to be the most promising method to generate xenogeneic organs.”

“This is the first report of full-term pig-monkey chimeras,” Tang Hai, one of the study’s corresponding authors, told The New Scientist. Hai and his team produced the chimeras at the State Key Laboratory of Stem Cell and Reproductive Biology in Beijing.

Hai suggested they died due to complications with the in vitro fertilization process because the purebred pigs didn’t survive, either.

The Chinese scientists aren’t the only ones pushing the boundaries of science and science fiction. A Japanese scientist is also trying to create a human-rat hybrid in order to grow a human pancreas.

Hai says his team will try to produce more chimeras with a higher proportion of monkey cells in the future.

Scientists previously made a living pig embryo with some human characteristics.

National Geographic reports the disturbing new experiment involved pig embryos injected with human cells. Researchers at Salk Institute for Biological Studies in La Jolla, California said they implanted the living pig-human embryos, or chimeras, in adult pigs’ wombs and allowed them to grow between three and four weeks. Later, the scientists said they removed the creatures, which then died, and studied them.

Jun Wu, a lead study author, told National Geographic that the researchers created 186 later-stage pig-human embryos that survived until removed from the womb.

There is wide-spread societal discomfort with the ethics of creating creatures that are part human, part animal, but it has not stopped several U.S. research groups from delving into the controversial experimentation anyway.

Bioethicist Wesley Smith has previously warned about experiments with human-animal hybrids and letting scientists police themselves — because they often throw ethics and a respect for human life out the window.