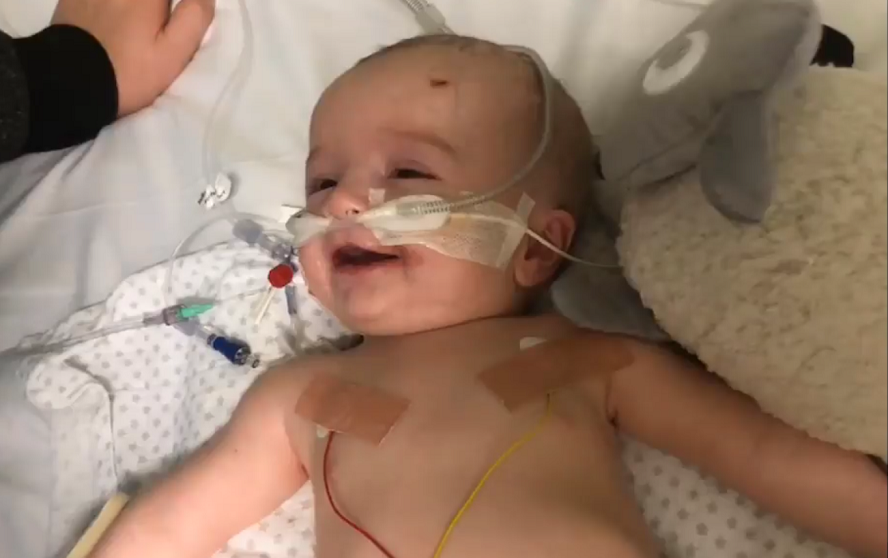 The early morning hours of March 15 were filled with terror for the Labuschagne family.  14-week-old baby Michael unexpectedly suffered cardiac arrest. His mother, Emma Labuschagne, described the moment in a video shared on Facebook, writing, “We watched our baby breathless, gasping for air while his heart stopped and paramedics worked to save his life.  In that moment I did not think Michael would make it through.”

Remarkably, Michael did survive and was rushed to the hospital, where he was placed in a medically induced coma.  In her video, Michael’s mother writes that the family was told their son was not likely to survive the ordeal, and if he did, he “would not be the same baby.”  Michael had been without oxygen for 9 minutes during the medical emergency, leading his medical team to believe that he would be severely brain-injured.  Families of patients in such situations are often not given any reason to hope.

Five days later, when doctors removed some of the sedatives and Michael began to wake up, he gave his family an unmistakable sign of hope.  His mother wrote, “The first thing he did when he opened his beautiful brown eyes was smile at his daddy.”

“It’s a moment I will cherish with every inch of my heart,” Labuschagne told CNN. “To be really honest, it’s got to be the happiest moment of my life.  He is a living miracle, and we have never felt prouder of him.”

Michael’s medical problems, however, were far from over.  Doctors discovered that the infant had a 5 cm cardiac fibroma, a tumor in the left chamber of his heart.  The condition is so rare that doctors in the United Kingdom, where the Labuschagnes live, have no experience operating to remove the tumor.  They placed a pacemaker and defibrillator but are unable to offer any hope of improvement beyond waiting for a heart transplant.

Through research, the Labuschagnes found an alternative: traveling to the United States for potentially life-saving surgery.  Boston Children’s Hospital, the premiere hospital in the world for these types of conditions, has experience with the surgery Michael needs.  His mother told CNN, “We researched the hospital and specifically the cardiac surgeons, Dr. (Pedro) del Nido and Dr. (Tal) Geva.”  The surgeons have a 100% success rate, so the family had no doubt that they would do whatever is necessary to make the journey.

Michael’s mother said, “When we received a response from Boston confirming that he would be a good candidate for surgery, it did not matter what the cost was.  We would pay any amount of money to save our child’s life.”

Since the family began fundraising for the trip and cost of the surgery, they have received tremendous support.  Emma Labuschagne said, “We have had well-wishers and donations from all over the world!  We are unbelievably thankful!”

For now, Michael, who is now 10-months-old, lives a surprisingly ordinary life, despite his significant medical challenges.  His mother says, “Looking at him, he is like any other baby.”

She told CNN, “He is always smiling and grinning widely.  His older brothers dote on him and he is a strong little character in our family.  We are just so grateful for him, even with his medical troubles.”

Michael’s story, which seems likely to have a happy ending, recalls other stories from the United Kingdom of families seeking medical care in other countries.  The world watched in horror as first Charlie Gard and then Alfie Evans were held captive in UK hospitals with the courts ruling in favor of anti-Life bureaucracy.  In those cases, the medically vulnerable boys were not able to leave the hospital and that meant their families were unable to move their sons for potentially life-saving treatment.

Every family has the right to advocate for the care of their loved ones.  Anti-Life laws that give hospitals power over life-and-death decisions must be repealed.  Every child, like Michael, deserves the care his family thinks is best.