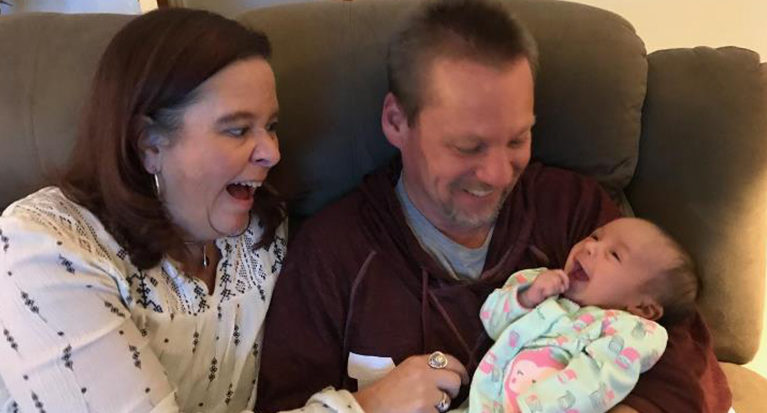 Tricia and her husband Scott spent long years wishing for a child. They tried for many years to conceive, and when they never did, they decided to start the adoption journey. They became an active couple, hoping to be paired with a child who needed a home, but after a few years of waiting with no responses they became discouraged.

“We thought, maybe God had other plans for us,” Tricia said. “We committed to thoroughly spoiling our nieces and nephews.”

Meanwhile, an acquaintance of Scott’s through work was facing her own difficulties. She was pregnant, but not ready to care for a child and didn’t want her family to know about it.

One night, Tricia and Scott received a Facebook message from her, asking if they would ever consider adopting from someone they know.

“This was someone who was very supportive when she learned we were hoping to adopt,” Tricia said. “She said she would even share our information if she ever encountered someone looking for options. When she reached out because she was pregnant, we said, of course we would!”

Tricia and Scott were thrilled at the possibility of receiving the child into their home. They were even more grateful and surprised when they heard the story behind the woman’s inspiration to contact them.

“She was going to terminate—she was actually on her way to the appointment, but she said she remembered Scott and I, and how much we wanted a baby but couldn’t have one. She realized the weight of her decision and decided to reach out to us.” Tricia said.

They soon finalized the paperwork to become her adoptive parents, and on October 7th, 2017, Tricia and Scott were in the delivery room while Kyndal was born.

“It was kind of like coming full circle,” Tricia said, explaining that she was also adopted.

After Kyndal’s birth, there was a 30-day period in which the birth mother could change her mind about the adoption.

“This was almost more stressful than the years we spent waiting to be matched,” Tricia said. “We were pretty sure she wouldn’t change her mind because she had such a good understanding with us, but there’s always that ‘what if?’”

Eventually the 30 days were over, and Kyndal has spent two happy years at home with Tricia and Scott.

“She is the sweetest, most beautiful blessing,” Tricia said. “It was all definitely orchestrated by God. I just think, if we had even had children when we were first trying, Kyndal might never have been born.”

Tricia acknowledged the long and difficult period of waiting during the adoption process was a necessary part of the story. A small misunderstanding in their paperwork caused years of waiting without a match, even though their profile had very high views from birth parents looking for a couple.

“But again, if we had been paired with a child any sooner, our Kyndal may never have been born,” she said.

Kyndal’s is an open adoption, and she her birth mother has visited a few times. Tricia will often send texts with pictures.

Tricia recalled a conversation she had with Kyndal’s birth mom once. Kyndal’s birth mom had said that instead of feeling the guilt she thought would accompany placing Kyndal for adoption, she is happy knowing that Kyndal is in good hands.

“It gives me peace knowing her birth mom is also at peace” Tricia said,

Tricia received permission from Kyndal’s birth mother to share their story, because they both hope it might bring peace to people experiencing life’s difficulties—in the painful times of being unable to have children, and in the uncertainty of unexpected.