Today, we know of 296 babies saved from abortion through your prayers since September 25!

On the latest episode of The 40 Days for Life Podcast, we recount some of the most exciting and dramatic reports of moms and babies spared from abortion.

From Meg in Cincinnati, whose tearful celebration of a life saved warmed hearts worldwide, to a former abortion worker who now leads a 40 Days for Life campaign in England, this uplifting podcast is guaranteed to put a smile on your face!

To listen in, visit this link.

Ethel, who leads the local campaign, has done an amazing job getting pastors to join the vigil.

“Yesterday, Father Mark came out along with Pastor Christine and her husband Pastor Young,” she reported.

At least 10 members of the clergy have joined so far! 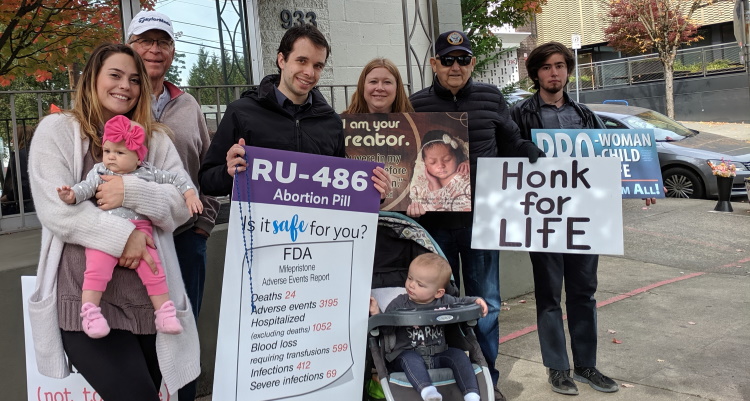 The sad-looking mom in Portland, Oregon said she already had 9 and 11-year-old children.

“I could tell she was very uncertain about what she was going to do,” reported Carissa. “I approached her and told her we were here for her and loved her…we had help for her, and I gave her a hug.”

“Please keep them both in prayer,” Carissa asked.

The owner of the house behind the Hollywood abortion facility is pro-life and allows vigil participants stand by his property.

This means that both entrances to the abortion center are covered in prayer–and the facility’s co-owner was NOT happy about it.

“Two police cruisers were dispatched to speak with us,” said Nancy, the local leader. “The officers could not have been nicer.”

The bigger victory came when a volunteer named Karla, with tears in her eyes, cried out, “We saved a baby!”

A young woman entering the facility saw the signs, heard the prayers, and chose life.

As she left, she waved, smiled, and said, “You don’t have to worry about me…I’m keeping my baby!”