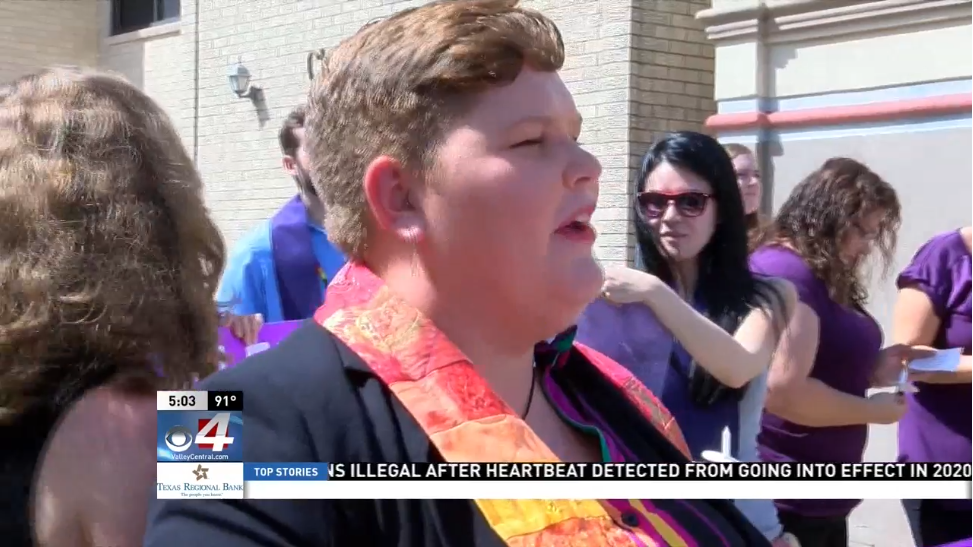 A small group of clergy has been traveling across the country using their roles as religious leaders to attempt to justify the killing of unborn babies in abortions.

On Wednesday, they gathered to “bless” the Whole Women’s Health abortion business in McAllen, Texas, during a sacrilegious ceremony. The local news outlet KGBT News 4 reported about the event where abortion activists sang religious songs, prayed and promoted the idea that it is morally acceptable to kill an innocent human being.

“We do this to support the community, to tell women, to tell the world, that people of faith don’t all think the same way about abortion,” said organizer Sonia Miller, of the Texas Freedom Network.

The Rev. Dr. Cari Jackson, a pastor and abortion activist with the Religious Coalition for Reproductive Choice, argued that it is “ungodly” to restrict abortions, according to the local news.

“We have come to Texas with a serious and yet also joyous focus: to affirm the staff and patients at Whole Woman’s Health as being blessed in their role of providing compassionate care,” Jackson said.

Jackson is an ordained minister in the United Church of Christ who has served in United Methodist and Presbyterian Church USA congregations. She has been a regular at these so-called abortion clinic “blessing” ceremonies. So far, her organization has held them in Ohio, Texas, Maryland and Washington, D.C.

Their goal is to make abortions seem morally acceptable in the eyes of the faith community.

“We want to show them a different vision of faith than they may have experienced before – one that upholds reproductive health, advocates for reproductive justice, and celebrates the beauty and power of supporting the bodily autonomy of each and every person that comes through their doors,” Jackson said.

Rather than using their influence to promote life and love and compassion for women and their children, these religious leaders are promoting death and violence.

True religion, true compassion, does not trample on the rights of innocent human beings. Children’s lives are at stake in abortion, and children are upheld throughout Christian teachings as valuable and worthy of protection. In the name of religion, these religious leaders are perverting the truth and leading people astray and, in doing so, further jeopardizing the futures of countless children in society.