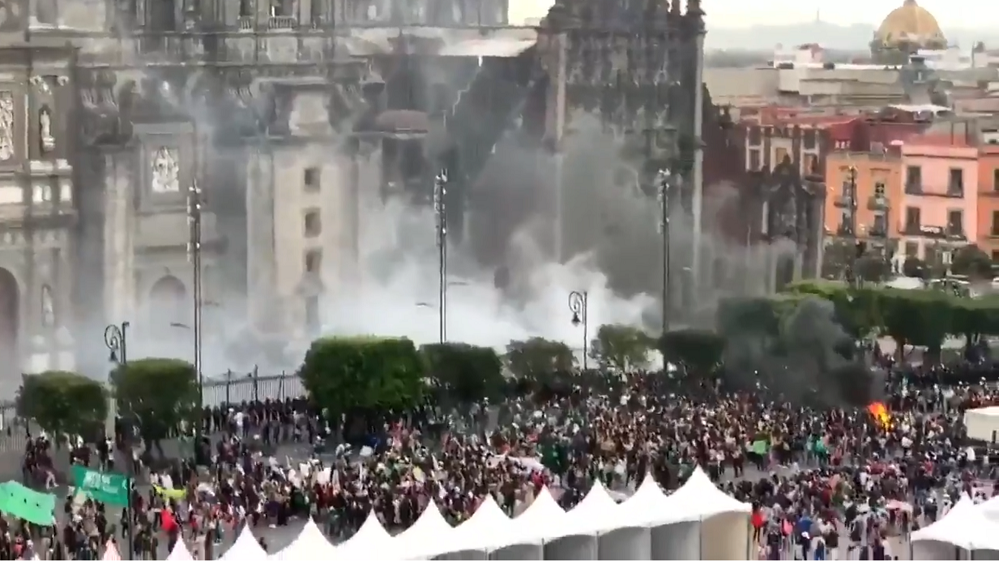 Abortion activists in Mexico City tried to burn down a Catholic cathedral and a government building Saturday during a protest demanding legalized abortion across the country.

The Catholic News Service reports Catholics stood in front of the doors of the Mexico City Metropolitan Cathedral to block abortion activists from entering and doing even more damage. Firefighters quickly extinguished the blaze, and police blocked the pro-abortion protesters from doing more damage at the cathedral, according to the report.

“I greet and recognize all the people who united today to pray, and to care for the churches in the center of Mexico City, as well as to assert the right to manifestation in freedom and in peace,” he wrote on Twitter (translated from Spanish). “The Church strongly rejects any form of violent confrontation. Let us defend dialogue, tolerance and love for one’s neighbor as tools to build the country for all.”

The cathedral was not abortion activists’ only target. Capital 21 news in Mexico City also reported about a fire at the city Chamber of Commerce and vandalism across the city.

“Some of the participants of the pro-abortion march set fire to the #cathedral of the #CDMX,” the news outlet wrote on Twitter (translated from Spanish).

According to the local news, about 1,200 abortion activists participated in the march. At one point, they attempted to set fire to the city Chamber of Commerce building; they also vandalized a number of monuments and buildings in the city, the report states.

Abortion laws vary by state in Mexico. Abortions are legal up to 12 weeks in Mexico City, and, last week, the state of Oaxaca voted to allow the same thing. Other states prohibit or widely restrict the killing of unborn babies in abortions, but federal lawmakers are considering a bill to legalize abortions for any reason up to 12 weeks of pregnancy throughout the country.