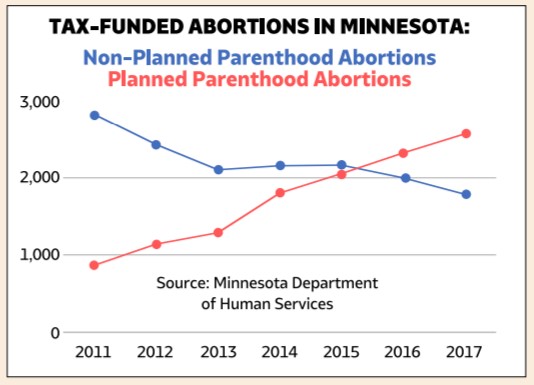 Abortions funded by Minnesota taxpayers in 2017 reached a record high for the third straight year, according to a report released by the Minnesota Department of Human Services. Taxpayers reimbursed abortion practitioners $1.06 million for a total of 4,356 abortions. State-funded abortions have risen each of the last four years—a 28 percent jump since 2013.

Planned Parenthood gets the credit

A large body of research, including a literature review by the Guttmacher Institute (which is aligned with the abortion industry), has shown that the availability of public funding leads to more overall abortions than there would otherwise be.

“This court-mandated abortion funding is financially and ideologically beneficial to Planned Parenthood,” notes Fischbach. “But it is harmful to everyone else. It’s harmful to the low-income women whose circumstances are exploited. It’s harmful to the helpless and vulnerable human beings whose deaths are bankrolled by the same government that is supposed to protect them.

And it’s harmful to the Minnesota taxpayers who are forced to be part of it.” Polling consistently finds that most Americans oppose taxpayer funding of abortion. MCCL helped pass legislation to stop tax-funded abortion in 2011 and 2017, but both bills were vetoed by then-Gov. Mark Dayton.