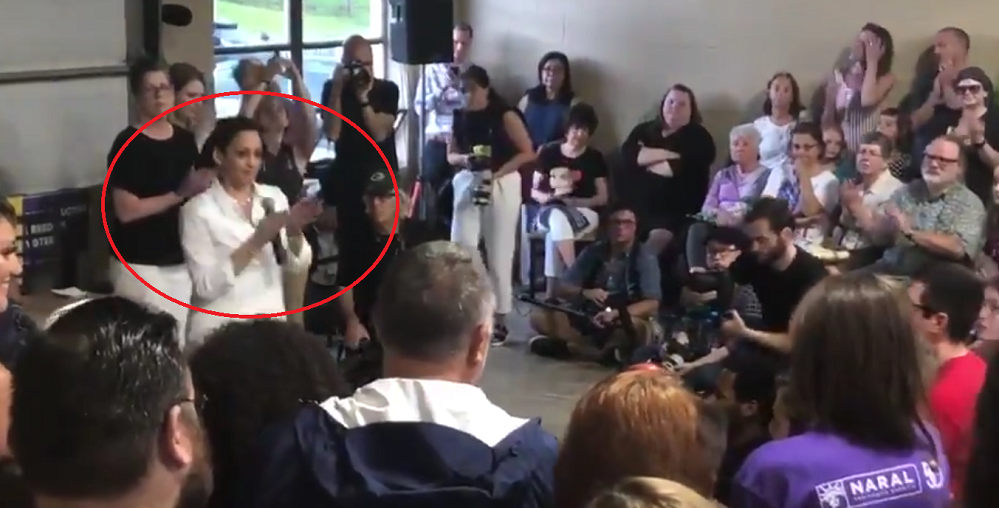 The California senator, who has close ties to the abortion industry, said she was in “awe” of the woman for telling her abortion story during a campaign stop Wednesday in Iowa, the Washington Examiner reports.

“I’m in awe of your courage to speak, really, to speak in this venue with all who are here and with such grace to tell your story that is a very personal story and is a story that many women in America can tell,” Harris said.

“But you have a special ability to have the confidence and the courage to speak it in a room like this, and those truths need to be heard by everyone, so I first just want to thank you for that. I really do,” she continued.

The woman told her story during a campaign rally hosted by NARAL, a radical pro-abortion group that supports unrestricted abortions up to birth and taxpayer-funded abortions.

The report identifies the woman only as Katie, an undecided voter from Iowa who said she has supported NARAL for 10 years.

“About 10 years ago, I found myself facing an unplanned pregnancy,” Katie told Harris during the rally. “To be totally honest, I’d never really thought too much about reproductive rights, because I never thought I would need them, but I do distinctly remember the moment I found out I was pregnant. I had two immediate thoughts before the denial and all those feelings that come later. I remember thinking, I need to have an abortion, and oh, I live in Iowa.”

Katie also criticized Republican lawmakers for trying to take away women’s “power” to have abortions.

Harris promised that if she is elected, she will try to stop “bad” pro-life laws that protect unborn babies and mothers.

“Let’s also do what we need to do around litigation against these bad laws, but let’s also from a pro-active position, think about how this is a fundamental issue of justice,” Harris responded. “And in that way, that’s how I think about the role of the United States Department of Justice, which is why I’m saying, in a Harris administration, we will have pre-clearance requirements for any state that infringes on a woman’s access to reproductive healthcare if they have a history of doing that, so that is a new and a different approach.”

Iowa woman tells @KamalaHarris her story of her fears and worries when she sought out an abortion in Iowa (1/2) pic.twitter.com/lYWb2jmM7P

And here’s the first part of how @KamalaHarris responded to the woman’s story #IACaucus (2/2) pic.twitter.com/nmDgDRu2f3

In May, Harris introduced a plan that would require states to get permission from the federal government before passing laws that ban, restrict or regulate abortions. Specifically, states that have a history of passing pro-life laws would be subjected to the oppressive mandate.

“We are living through an all-out assault being waged on women’s health and reproductive rights,” her campaign said in a statement. “Kamala Harris believes we need to fight back and block these dangerous and deadly laws before they take effect.”

Requests would go through the U.S. Department of Justice, which would determine whether the law can go into effect. If the DOJ rules in favor of the law, abortion activists still could challenge it in court, according to Harris’s plan. In essence, her would force a federal government agency to defend abortion on demand – even if future presidential administrations disagree.

The plan, a kind of “preclearance requirement,” is similar to the Voting Rights Act, which the U.S. Supreme Court ruled against in 2013, the New York Times reports.

Harris has a 100-percent pro-abortion voting record from the National Right to Life Committee. As attorney general of California, she prosecuted David Daleiden for exposing Planned Parenthood’s allegedly illegal sales of aborted baby body parts. Recently, she voted against a bill to protect newborn babies from infanticide.