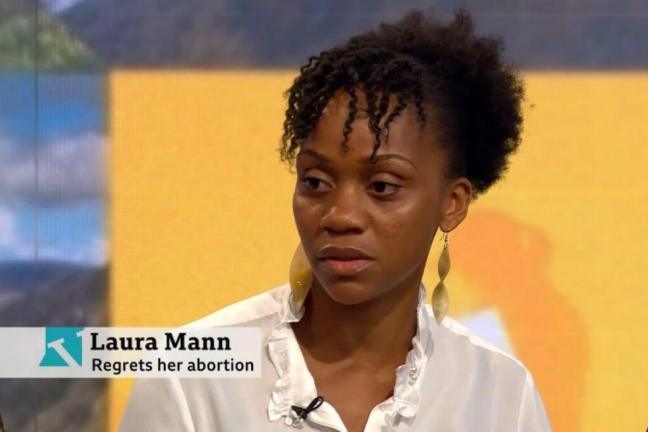 Laura had an abortion aged 19 when she was 21 weeks pregnant. She told the show that she didn’t feel she was properly informed, and didn’t see two doctors, as the law requires.

“I remember just seeing one GP at Kings College Hospital,” she said. “When I went into the room to discuss, the first option I was given was abortion. I was so afraid, so confused, I had no clue what to do. All the voices were telling me I couldn’t do it, I couldn’t do it. I felt so much pressure. I felt okay with myself to go in for an abortion, but when I left that clinic, that was the beginning of my nightmare.”

Laura went on: “In hindsight I wasn’t well informed in making that decision. When I came out of the Marie Stopes clinic in Brixton, the first thing that went through my mind was ‘where is my baby, what’s happened to the body of my baby?’ and I kept asking myself that question. The nurses that escorted me down to the recovery room, because I was in so much pain and sobbing, she said to me: ‘You silly girl, don’t you know what you’ve done?’ It made me so depressed. I questioned for months after months, nightmares and cold sweats, what happened to this baby’s body?”

“Why are women not informed?” she asked. “If I went in for an operation, I would get the full download. Why is it with abortion, it’s a secret? Why don’t you let us know what we are going for and what’s going to happen to our baby’s bodies?”

Laura’s testimony also made it clear that she is not alone in feeling this way. “I come across many women today that tell me the same thing, that were dying in secret. Because I tell my story so openly, they can speak up to me and say ‘I experienced the same thing as you and felt I couldn’t speak to anyone at the time. What can you do to help me?’ There are still women today experiencing the same thing.”

Caroline Gazet, an abortionist, who was on the panel, was only able to respond: “I am sorry you’ve had this regret. But we know that 95% of women don’t regret abortion. At Marie Stopes we take it very seriously informing our patients, but you also don’t want to frighten patients.”

Laura also got little sympathy from Independent MP Heidi Allen, told Laura: “There are always errors made in life. But I would struggle to take your desperately poor experience, as a reason, so many years ago to change the law.”

Coercion commonplace in the UK

However, Laura’s disturbing experience at a Marie Stopes clinic is not the aberration these panellists suggested. There have been a series of damning Care Quality Commission reports detailing safety violations and abuses at Marie Stopes clinics.  A 2017 report on the clinic in Maidstone, Kent, had staff reporting it as a “cattle-market” with a “culture that worked against patient choice.”

One section of the report uncovered that clinic staff were being paid financial bonuses for encouraging women to undergo abortions.  After the damning report was released, one woman came forward, claiming that her experience was in line with its findings. She said: “I saw several nurses and explained my situation. I felt like they wanted me to have an abortion. The place was chock-a block with people. It was like a conveyer belt. When I told them I didn’t want the abortion they accused me of wasting their time. I was ushered out of the door half-dressed and in tears.”

Whilst Laura’s account is saddening, it is not shocking, as it is evident that the issue of coerced abortion with women left uninformed of the facts regarding abortion is becoming commonplace in the United Kingdom.

It was only last month that a British judge ordered a 22 – week pregnant women with learning disabilities to have a forced abortion against her will. The decision was later overturned, however during the appeal case details emerged of what information the woman had been told regarding an abortion. The woman seemingly was denied of any factual consultation and instead was told: “She would go to sleep. She would have an operation and when she woke up the baby would no longer be in her tummy. But she would get a new doll.”

Let’s trust women with the truth

As another panellist on the show said, misleading language is often used to obscure the truth about abortion. Dr Calum Miller said: “Often the medical profession hides behind euphemistic terminology. It is often described as ‘products of conception’ or ‘pregnancy tissue.’ When we inform people on the facts of abortion, most people I speak to have no idea what it involves and are absolutely horrified to find out what our law actually says.”

It’s time to see a change

Louise Grant, Director of Abortion Recovery Care and Helpline (ARCH), said: “The notion that women do not regret abortion has to be re-evaluated. The reality is that many women do struggle with their decision and it is beyond cruel to continue to ignore these women. All too many feel they were poorly informed, and their state of ambivalence or feelings of pressure have failed to be recognised.”

Miss Grant continued: “ARCH would like to see much better safeguarding in place for those who may feel pressured or coerced into the decision, and more focus on how to recognise these signs and how to offer alternative solutions. It’s time to see a change.”