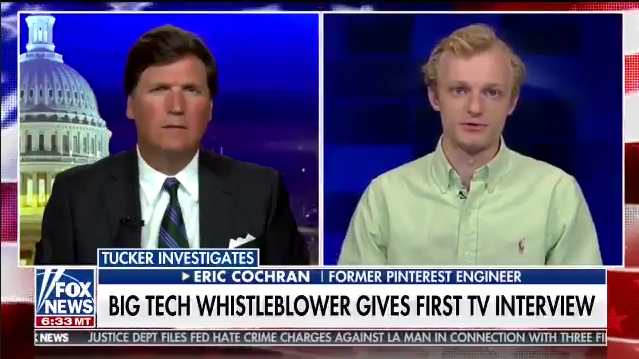 Eric Cochran worked as a software engineer at Pinterest before he was fired for exposing its bias against pro-lifers, The Daily Caller reports.

Cochran, who is pro-life, said he was fired after the company realized that he was the whistleblower who spoke with Project Veritas. He said security guards approached him and told him to leave; when he asked why, he said they did not give him an answer.

“I did this because I saw wrongdoing,” Cochran told Fox News host Tucker Carlson on Wednesday. “And the normalization of censorship within Big Tech companies right now is downright un-American.”

“I saw a Big Tech company saying … behind closed doors that they believe that Live Action shouldn’t have a platform to speak, and the big thing is: I want them to have to … say this publicly instead of behind closed doors,” he said.

Cochran said he hopes other employees within these big media companies will start blowing the whistle on their secret biases, too.

“This is about abortion. You are seeing now with YouTube doing Pinterest’s bidding by removing the Project Veritas video,” he said.

Pro-life advocates set up a fundraiser to help Cochran until he can find another job. Find it here.

“Pinterest has targeted Live Action, I believe, because our message is so effective at educating millions about the humanity of the preborn child and the injustice of abortion,” Rose said.

She said they have received numerous complaints in the past few months about people having difficulty pinning their content.

She urged the company to stop its “secret and dishonest” censorship and allow the free expression of pro-life content.

Cochran’s concerns did not end there. He said someone at Pinterest also added “David Daleiden/Planned Parenthood” to a list of conspiracy theories that it monitors. Daleiden exposed the abortion chain for harvesting aborted baby body parts and allegedly illegally selling them.

Last fall, makers of the “Gosnell” film said Facebook also censored their ads. The Susan B. Anthony List accused Facebook of censoring its election ads just prior to the November mid-terms as well.

Live Action has said Twitter repeatedly censored its ads. Founder Lila Rose said the social media site blocked their ability to advertise and told them to change information on their websites if they want to start advertising again. In 2015, Facebook also refused to allow Live Action to advertise one of its stories because “the image or video thumbnail may shock or evoke a negative response from viewers.” The image was of baby Eli Thompson who was born without a nose.