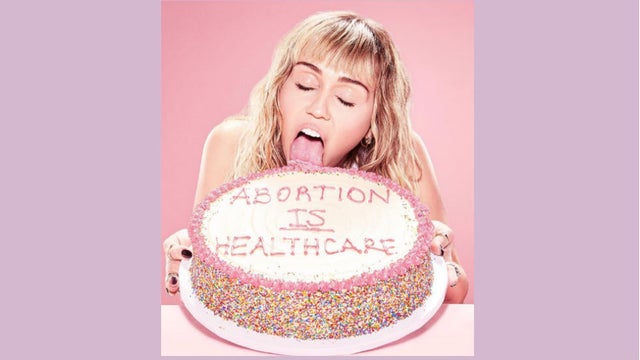 Miley Cyrus is up to more crude, attention-seeking antics – this time by supporting abortion on demand.

Partnering with Planned Parenthood, the largest abortion provider in America, Cyrus released a series of absurd and crude photos on social media Tuesday, including one of her licking a cake that reads, “Abortion is health care.”

The photo and another one of her topless with two halves of a grapefruit covering her breasts advertise a new fundraising campaign that she began with Marc Jacobs, according to the Inquisitr.

She and Jacobs are selling a $175 pink hoodie, and giving the proceeds to Planned Parenthood. The hoodie design is the same photo of Cyrus covering her bare chest with the grapefruit and the words “don’t f— with my freedom” written with Scrabble-type letters.

At least one abortion activist is not happy, though.

Yahoo News reports Becca Rea-Holloway, or The Sweet Feminist, said she designed an almost identical cake last year, and Cyrus stole her design. Cyrus responded with an apology online, but Rea-Holloway said that was not enough.

“It is a direct theft of my own original art work from May 2018, with no credit,” she said. “It’s literally my exact handwriting, message, and concept.”

The singer and actress, known for shocking audiences with nudity, sexual gestures and generally grotesque behavior, has been advocating for abortion for years. In 2016, she ran another fundraiser for the billion-dollar abortion chain Planned Parenthood by selling a T-shirt with her image and the word “pro-choice.”

Planned Parenthood is the largest abortion provider in America. Last year, it reported more than 330,000 abortions and a record revenue of $1.66 billion, including half a billion from taxpayers.