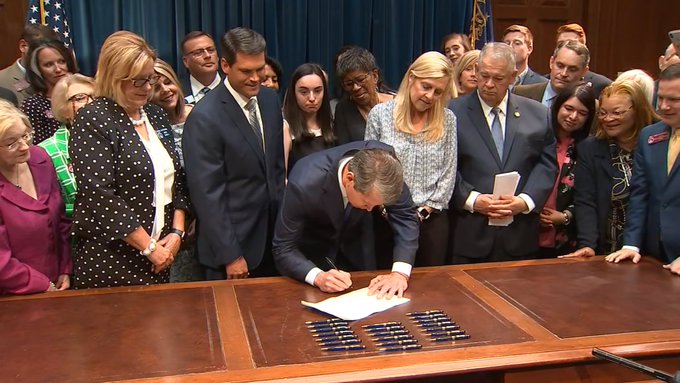 Kemp, a pro-life Republican, signed the pro-life measure despite a threat by actress Alyssa Milano and other Hollywood elites to boycott the state if he does.

“The Living Infants Fairness and Equality Act … recognizes something that many have know for years. It recognizes that science tells us that children in the womb are living, distinct human beings that are worthy of full legal protection,” Kemp said during the signing ceremony.

“Common sense tells us if you look at a child in the womb with a beating heart and a distinct blood type, and you ask a preschooler, a small child, ‘What are you looking at?’ … They would look and say that’s a baby,” Kemp continued.

“(The bill) is very simple but also very powerful: a declaration that all life has value, that all life matters, and that all life is worthy of protection,” Kemp, flanked by supporters of the bill, said Tuesday morning before signing the legislation at the state Capitol. “I realize that some may challenge it in a court of law. But our job is to do what is right, not what is easy. We are called to be strong and courageous, and we will not back down. We will always continue to fight for life.”

The bill passed the state legislature earlier this spring. It would ban abortions on an unborn baby after their heartbeat is detectable, around six weeks. It would allow exceptions for rape, incest and threats to the mother’s life. In addition, the bill would allow parents to claim unborn babies as dependents on their taxes and include the unborn baby in census data. It also would allow mothers to collect child support for pregnancy and delivery costs from the father prior to the baby’s birth.

AL.com reports the ACLU of Georgia responded Tuesday with plans to sue to block the law.

“Every federal court that has heard a challenge to a similar ban has ruled that it’s unconstitutional,” spokesman Sean Young said.

Kemp acknowledged the possibility of a lawsuit Tuesday, the Huffington Post reports.

“I realize some may challenge it in the court of law,” the governor said. “But our job is to do what is right, not what is easy.”

Meanwhile, Hollywood liberals have been protesting the bill and calling for a boycott of the state, a popular filming location for movies and TV shows. Milano and other Hollywood liberals used their influence to try to stir up outrage about the heartbeat bill. Celebrities including Alec Baldwin, Amy Schumer, Rosie O’Donnell, Sean Penn, Mia Farrow and Ben Stiller joined Milano in their condemnation of the pro-life bill.

Star Wars actors Mark Hamill and Natalie Portman said they would boycott the state as well.

“The surge in attempts to ban abortion in the earliest stages of pregnancy underscores that the end goal of anti-abortion politicians and activists is to ban all abortion—at any point during pregnancy and for any reason—even as they shamelessly spin a false and inflammatory narrative about abortion later in pregnancy,” Elizabeth Nash, of the Guttmacher Institute, told ThinkProgress in a statement.

But Georgia state Rep. Ed Setzler, the lead sponsor of the bill, said his goal is to protect unborn babies, who already are unique, living human beings by six weeks of pregnancy.

“Protecting life in the womb with a human heartbeat is what science, law and human conscience would suggest,” Setzler said.

This winter, pro-life lawmakers have introduced a number of heartbeat bills including in Florida, Mississippi, Missouri, Ohio, South Carolina, Tennessee and Texas.

The Eighth Circuit Court of Appeals said the following about its ruling on the six-week abortion ban: “Because there is no genuine dispute that (North Dakota’s law) generally prohibits abortions before viability — as the Supreme Court has defined that concept — and because we are bound by Supreme Court precedent holding that states may not prohibit pre-viability abortions, we must affirm the district court’s grant of summary judgment to the plaintiffs.”

There is more hope that the U.S. Supreme Court may consider an abortion ban, but it is difficult to say if it would for certain – especially after Chief Justice John Roberts recently sided with the liberal justices on an abortion case.