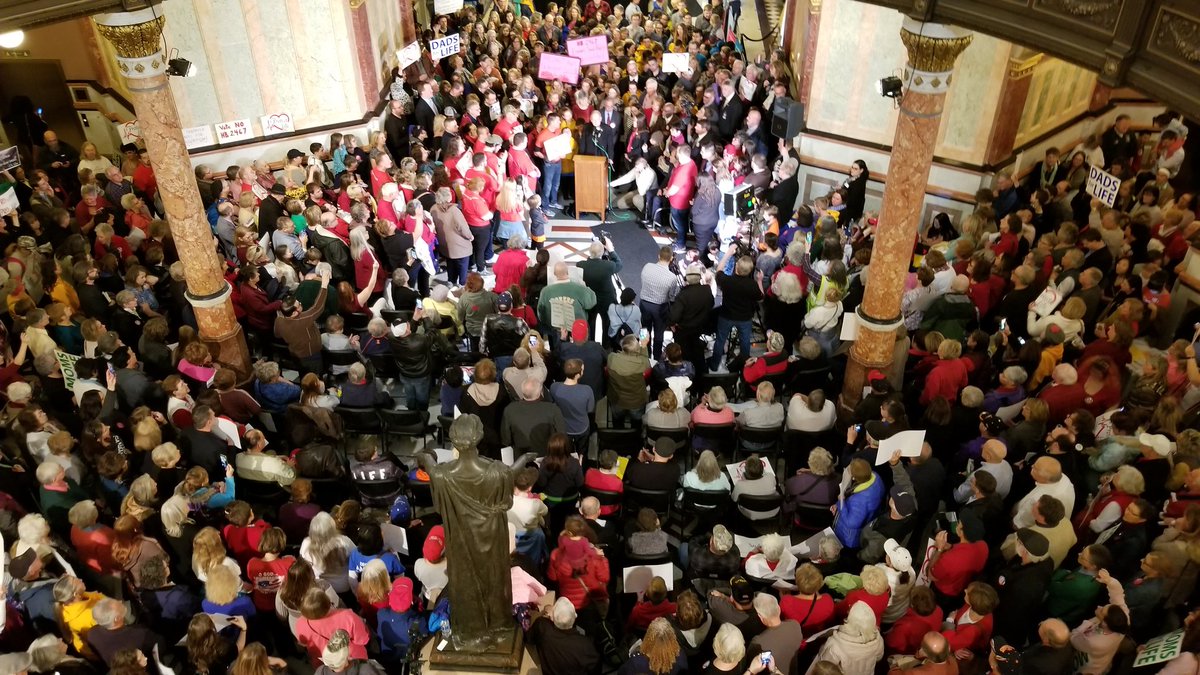 Pro-lifers flooded the Illinois Capitol on Wednesday in opposition to several radical pro-abortion bills that would allow unborn babies to be aborted up to birth.

The Illinois News Network reports so many people showed up for the peaceful pro-life rally that police temporarily closed access to the capitol due to “overcrowding.”

Photos on Illinois Right to Life’s Facebook page show pro-lifers packed in the capitol rotunda. The pro-life group said more people stood outside the building because they could not get inside.

“There is widespread outcry from the people of Illinois against these extreme anti-women and anti-children bills since they were introduced a month ago,” said Mary Kate Knorr of Illinois Right to Life Action, prior to the rally. “Residents from all corners of Illinois are expressing outrage at this proposed legislation, which disregards the health and safety of women.”

The pro-abortion legislation would treat abortion as a “fundamental right” and strip away even minor protections for unborn babies and medical professionals who object to abortions. Capitol News Illinois reports the Reproductive Health Act (House Bill 2495) appears likely to pass with Democrats in control of both state houses and the governor’s office. Gov. J.B. Pritzker supports the bill.

But pro-lifers have renewed hope after state residents turned out in huge numbers on Wednesday.

According to Illinois Right to Life Action, more than 10,000 people have filed witness slips against the legislation – the strongest opposition that pro-life lobbyist Ralph Rivera said he has ever seen.

State Rep. Avery Bourne, a pro-life Republican who is pregnant with her son, slammed the legislation for allowing healthy, viable unborn babies to be aborted for basically any reason, according to the report.

“I have a healthy baby, I’m healthy, and the people who are pushing this would say that it could be my decision to end his life when he has a 62 percent chance of living if he were born today,” Bourne said.

She said even most pro-choice Illinoisans disagree with extreme abortion expansions, The State Journal-Register reports.

“At its most basic level, that’s what this bill does,” she said. “It makes it clear that this is a healthcare procedure. It’s about patient care and access. It’s just that simple.”

But polls show that the public does not support such radical proposals. A recent national poll by Marist University found that three in four Americans (75 percent) say abortion should be limited to – at most – the first three months of pregnancy. This includes most Republicans (92 percent), Independents (78 percent) and Democrats (60 percent).

If the legislation passes in Illinois, it would prohibit the state from interfering in any way with abortions. It would erase criminal penalties for performing abortions and allow non-doctors to do them. The legislation also would repeal the partial-birth abortion ban, abortion clinic regulations and conscience protections for medical workers.