The Canadian euthanasia/assisted suicide (euphemistically known as Medical Aid in Dying (MAiD) data has been missing. I have received multiple inquiries asking how many Canadians have died by MAiD, now we have some data, but not from the government.

On March 15, 2019; Jocelyn Downie, Canada’s leading “academic” pro-euthanasia activist spoke at a lunch lecture for the Royal Society of Canada in Ottawa. In her presentation Downie stated that 7949 people have reportedly died by MAiD in Canada as of December 31, 2018. Downie clearly has access to euthanasia data that is otherwise unavailable. 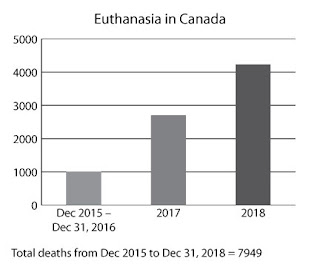 Last December Québec published euthanasia data indicating that 1664 people died by MAiD from December 2015 to March 31, 2018. The data also indicated that there were 171 missing reports and 142 assisted deaths that were unaccounted.

What else did Downie say?

Downie stated that 99% of the assisted deaths are euthanasia, 1% assisted suicide, 95% are done by physicians, 42% occur at home and 41% occur in a hospital.

Downie stated that no ineligible persons died by MAiD. I guess that Downie didn’t read the Québec Interim report which stated that: