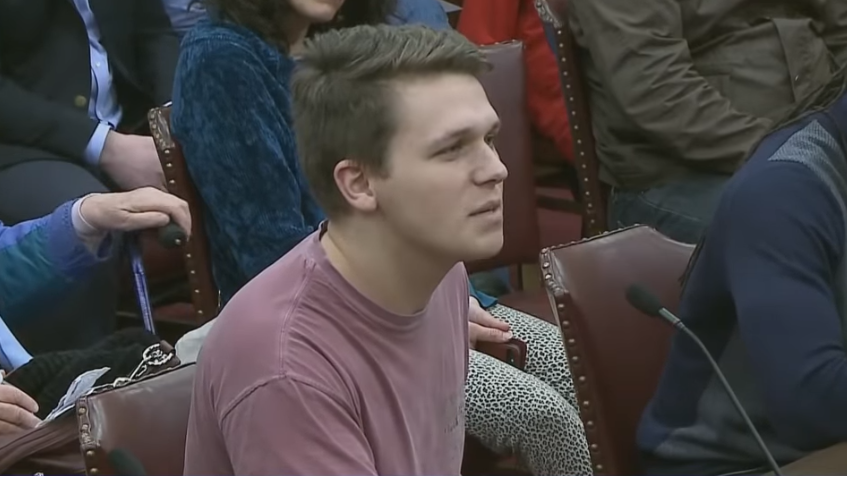 During a hearing on state Senate Bill 152, the young adult urged politicians to reject the radical pro-abortion agenda being pushed on America, the Daily Wire reports. A video of the hearing did not include the young man’s name.

“This seems like a calculated attack on life by the [Democratic National Committee] in all of their states,” he said, referring to similar pro-abortion legislation in New York, Vermont, Virginia, New Mexico and Massachusetts.

The Rhode Island bill would allow unborn babies to be aborted for basically any reason up to birth, force taxpayers to fund abortions through Medicaid and water down the state parental consent law, among other things. It passed the House last week.

“I found it to be uncanny parallel political thinking when three states can introduce a very similar bill within a span of two months directly after a midterm election,” the young man told lawmakers ahead of the vote.

He said Rhode Island politicians did not campaign for a late-term abortion expansion when they ran for office; instead, they just called themselves pro-choice.

“This bill takes Roe v. Wade and expands it to a point … where we don’t know what the repercussions of that on our society are,” he said.

However, society does know the repercussions of Roe v. Wade: 61 million aborted babies and countless suffering individuals who were deceived into thinking that aborting a baby would solve their problems.

He also questioned Planned Parenthood’s motives and the organization’s suspect founding grounded in eugenics — led by Margaret Sanger. “Now we’re told that the organization has changed; it’s new people, they don’t think that anymore,” he said. “Yet, what is all of this that we’re seeing now? They’re saying, ‘Oh, we’re compassionate because we don’t want the poor family to have the baby.’ Before it was hatred: ‘We didn’t want the poor people to have the babies because we thought they weren’t good for society.’ But, now, now, we’re so loving: ‘We don’t want them to have the babies because it’s not good for them. The baby won’t be happy; the baby will have a poor quality of life.'”

The young man also tackled the notion that men should not speak out against abortion.

“Men are told that we can’t talk. That when the children are dying, that when we see these things happening, we have to sit down and be quiet,” he said.

“Yet, we have the same gumption to look back into civilizations that commit genocide and say, ‘Where were you? Why weren’t you standing up? Where were all the people in Nazi Germany?’” he continued. “Well, I wonder if maybe people will look back on us that way and say, ‘Where were all the people standing up?’ We were told that we didn’t have voices, we were told that we didn’t even know morality. As men, we couldn’t speak out about our children.”

He urged lawmakers to stop rushing through the bill and allow Rhode Islanders time to understand what it could do. He also referred to polls that consistently show that most Americans oppose late-term abortions.

Rhode Island Right to Life, state Catholic leaders and Republicans are urging pro-lifers to keep voicing their opposition to the legislation.