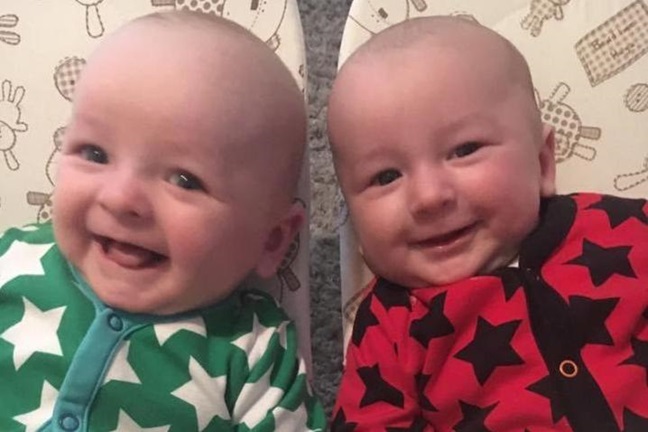 A mother has spoken out about how doctors called her inhumane when she ignored numerous attempts to get her to abort her twin boys.

Hannah Morris was urged to terminate her pregnancy when her waters broke at just 16 weeks. She was diagnosed with preterm premature rupture of the membranes (PPROM), and told that neither baby had any chance of survival.

“I had an internal examination and the doctor told me that my waters had broken, and he was really sorry but there was nothing they could do for us,” Ms Morris told The Sun. “I asked a million questions, can the other baby survive? Can it reseal?

“My gut was telling me not to follow the advice”

She describes being pressured to have an abortion. “They said, ‘no, there was a 100 per cent chance that this baby won’t survive, you need to have to have some medicine to induce labour, it’s your only option’. I didn’t want to do that. My gut was telling me not to follow the advice.

“I knew nothing about PPROM. I didn’t know it was a thing before then. I just rejected all the medical advice.  I said ‘if I am going to lose them, I lose them naturally and I’ll let nature take its course’.”

Ms Morris says she and her partner Mark King were then left in a side-room for 48 hours, with no medical support, to miscarry their children. However, a scan then revealed that both babies were actually healthy and the couple was sent home.

They then turned to voluntary organisation Little Heartbeats for support and Ms Morris put herself on bedrest to give her babies the best chance of survival. But the pressure from medical professionals to end the pregnancy continued.

At a follow-up appointment at the hospital, a doctor told her that if the babies got to 24 weeks, their limbs would be stuck together and their vital organs wouldn’t be functional. “[They said] I was only causing them more pain by carrying on with the pregnancy,” Ms Morris says. “We were considering at this point terminating the pregnancies because this was coming from top consultants.”

After doing more research and getting support from outside the NHS, they continued with the pregnancy, but the demands to abort continued to come at the weekly scans, despite them showing healthy babies.

Ms Morris said: “That’s what pushed us to carry on with the pregnancy every single week. We would see the boys on the screen and they would be fine.  The sonographer would say his lungs are developed, so the kidneys are fine.  The doctors reviewed it each week and say it looks like they are doing fine but that is going to change so you need to terminate the pregnancy.”

Proving them all wrong

Despite the negative medical advice, Ms Morris made it to 34 weeks and had a c-section. George was born first weighing 5lb 4oz and Alfie followed at 4lb 1oz. They both spent four days in the NICU, but despite Alfie being born with holes in his heart and George suffering a weakened immune system due to his premature birth, both toddlers are now healthy and thriving.

“Taking our boys home was amazing. Just to know that we were right and that we had made the right decision by our children,” Ms Morris said.

Abortion a “get out clause”

She believes the PPROM was down to a midwife failing to treat her for an e-coli infection, and the pressure to abort was to cover up that mistake. “Everything just comes back to that one midwife not treating me for the infection. I think she made a massive error in judgement, but the NHS in itself has such a negative outlook on PPROM and they also don’t know what the protocol is. A lot of the doctors had not got a clue what to do with me.”

She says that persuading her to have an abortion was a “get out clause… because it was easier to say get rid of the babies than to actually treat PPROM”.

Ms Morris hopes that telling her story will mean other parents are more aware of PPROM.

SPUC’s deputy CEO John Deighan says the story also illustrates that doctors are not always right. “It certainly helps expose the groundless pro-abortion pressure that comes from medical staff, who now seem to see abortion as a quick fix for any problem pregnancy,” he said. “Far from being inhumane, as staff branded her, she was a true hero for the sake of her children.”