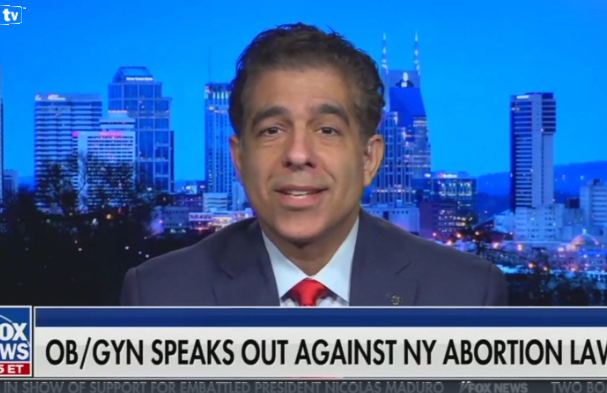 The weekend editions of Fox and Friends on Fox News Channel spent a substantial amount of time highlighting the “outcry” over an “extreme’ new law recently signed by New York Democratic Governor Andrew Cuomo that would allow abortions to be performed all the way up until right before birth — a story not noticed at all by the other networks.

The weekend anchors even hosted an OB/GYN who argued that an abortion to save a woman’s life would never be necessary in the third trimester as he also recalled receiving threats since he spoke out on the issue.

Additionally, on Friday’s show, right-leaning actor Dean Cain feared that both the New York law and a similar proposal in Vermont would legalize the kind of murder against babies that was perpetrated by former Pennsylvania abortion doctor Kermit Gosnell, which was dealt with in Cain’s recent film, Gosnell: The Trial of America’s Biggest Serial Killer.

On Fox and Friends Sunday, at 8:25 a.m. Eastern, after showing a clip Governor Cuomo bragging that his state would have “the most aggressive women’s equality platform in the nation,” fill in co-host Katie Pavlich recalled that OB/GYN Doctor Omar Hamada used Twitter to respond to the law’s passage: “There’s not a single fetal or maternal condition that requires third-trimester abortion. Not one. Delivery, yes. Abortion, no.”

Pavlich then brought aboard Dr. Hamada as a guest, who began by reiterating the point in his Twitter message that, in the third trimester, complications may require a premature delivery, but not an abortion. After Pavlich followed up by asking if the new abortion law could be described as merely “recreational,” Dr. Hamada elaborated:

It actually moves all the protections for the fetus by removing any homicidal protection. So, before, the New York Penal Code basically stated that, after 24 weeks, if a baby was killed, there was a risk of the perpetrator being charged with a homicide. That has been removed.

He further charged: “It allows for any health care practitionary that’s licensed or authorized … to perform an abortion, so it doesn’t have to be a physician. And it removes all restrictions at all for any type of abortion at any time for any reason.”

After Pavlich asked him about the cheering that could be heard when Governor Cuomo signed the law, he lamented that it was a “travesty” and “unconscionable.” He went on to recall that he has received threats — including death threats — from pro-abortion activists since he began speaking out on the issue.

The four-hour Sunday edition of the show spent more than 11 minutes across three segments discussing the issue with various guests.

Fox and Friends Saturday gave the issue almost nine minutes including two full segments. And on Friday’s show, as Cain appeared as a guest, the Vermont proposal was discussed, leading to him suggesting that these new laws would legalize Dr. Gosnell’s atrocious crimes.