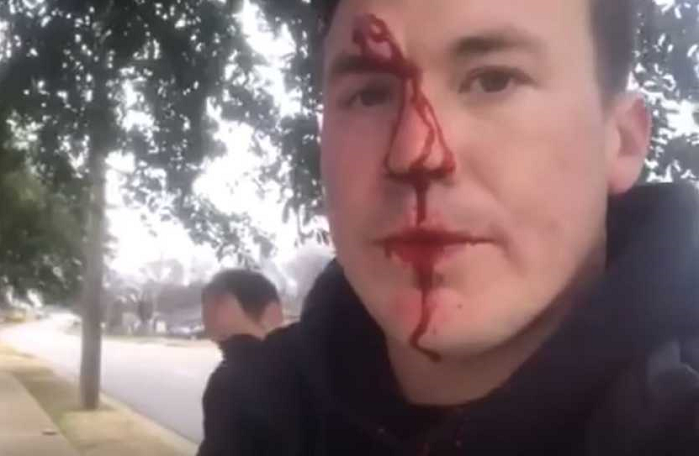 A Texas pro-life advocate was brutally assaulted Friday outside a Fort Worth abortion facility, according to a video that captured the incident on film.

Faithwire reports Fort Worth police are investigating the incident as a possible religious hate crime and have identified a suspect.

The incident left sidewalk advocate Ryan Roberts bloodied and shocked. According to the report, Roberts, the founder of Abortion Clinic LIVE, was standing outside Whole Woman’s Health abortion facility in Fort Worth urging women to choose life for their unborn babies when the assault occurred.

In the video, a truck can be seen pulling up to the abortion facility. Roberts calls out, “This place kills babies! Can we help you?” and “Jesus loves you!” as an abortion facility escort approaches the driver.

A few seconds later, the truck driver backs up and the man begins talking to Roberts. Then, the driver appears to threaten Roberts and his family, asking, “Do you want to die? You and your whole family?” Robert appears stunned at the words, noting that the man has Christian bumper stickers on his truck.

Roberts then tells the man that he advocates for life outside abortion facilities because his mother almost aborted him. He tells the man, “Jesus loves you.” The driver backs away into the street and appears to leave, but then stops the truck in the middle of the road and jumps out.

The driver can be seen approaching Roberts and then punching him in the face at least three times before running away. Roberts’ face can be seen bleeding as he stands on the sidewalk stunned.

Mark Dickson of Sovereign LOVE Church, who saw the incident take place, said the driver was not there with a patient; he appeared to stop just to see what they were doing.

“What you see in the video is our entire interaction with this man,” Dickson told Faithwire. “Yet that interaction led to that man stopping in the middle of the road, getting out of his car, and punching Ryan Roberts several times in the face. All for sharing about Jesus Christ.”

He said violence is a risk that they take when they share their faith outside abortion facilities.

“When we are ministering at the abortion clinic and someone approaches us we do not know if they are going to be for what we are doing or against what we are doing,” he said. “All that we know is that inside that clinic they are murdering babies. We are there to proclaim the Gospel of Jesus Christ and to try to save as many of those babies as we can.”

After the incident, Roberts said what stunned him the most was that the man claimed to be a Christian.

“Of all the people who I thought would assault me out here it was not that guy,” Roberts said. “That guy had Jesus stickers all over his truck. It was crazy.”

The assault comes barely a month after a pro-life female lawmaker and her infant sons were cursed at by abortion activists in Ohio. A pro-life pregnancy center also was vandalized last month in Vancouver.

Pro-life advocates increasingly have become targets of harassment and violence. In the fall, LifeNews reported about several violent assaults on young, female pro-life advocates. A video of one incident showed an abortion activist throwing a metal cart at a young woman with Toronto Against Abortion. In another video, a pro-life advocate with Campaign Life Coalition was roundhouse kicked at a pro-life rally in Toronto.

In October, an older Florida pro-life advocate also was punched in the face and taken to the hospital after an attack outside a Planned Parenthood in Naples, the local news reported.

LifeNews has reported dozens of other threats, vandalism and harassment against pro-life advocates in the past year. These range from death threats against prominent pro-life politicians like U.S. Reps. Chris Smith, Cathy McMorris Rodgers and Steve Scalise to a Missouri sidewalk counselor who had a gun pointed at him.

In September, a popular conservative blogger went under police protection after she received rape and death threats because of a pro-life tweet. In June, a Florida man who volunteers at Planned Parenthood was arrested after he allegedly threatened to kill pro-life U.S. Rep. Brian Mast’s children. Then in August, someone threatened to rape and kill the family of a pro-life advocate with Operation Rescue.