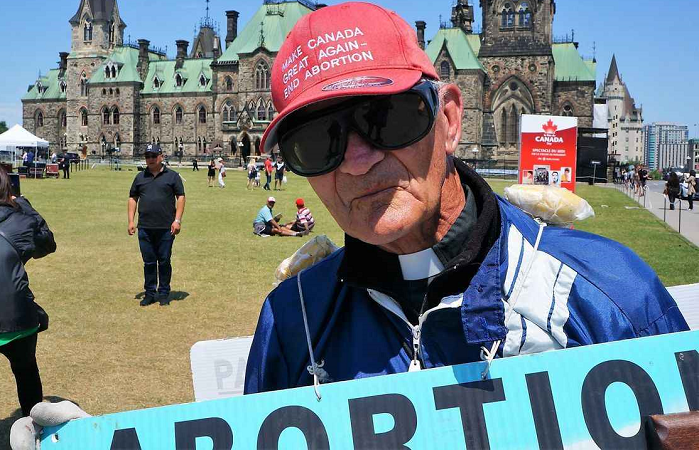 An 83-year-old Catholic priest was charged with “intimidation” late last year for standing silently outside of a Canadian abortion facility with a sign about free speech.

Authorities recently dropped the intimidation charge against Father Tony Van Hee but replaced it with two similar charges about violating an Ontario buffer zone law, according to Canadian Catholic News.

Van Hee’s alleged crime was to stand silently outside the Morgentaler abortion facility in Ottawa on Oct. 24 with a sandwichboard sign that read, “The Primacy of Free Speech Cornerstone of Western Civilization” and “Without Free Speech The State is A Corpse.”

The province’s buffer zone law prohibits pro-lifers from speaking freely within 50 meters of an abortion facility. It is one of the country’s many discriminatory laws and public policies against pro-life advocates and unborn babies.

Father Van Hee is expected to appear in court later in January.

Police initially charged him under the Safe Access to Abortion Services Act, which reads in part: “While in an access zone established under section 6 for a clinic or facility, no person shall… for the purpose of dissuading a person from accessing abortion services… intimidate or attempt to intimidate the person.”

The elderly priest plans to plead not guilty, according to the report.

His lawyer Albertos Polizogopoulos said he wrote to the attorney general contesting the “intimidation” charge.

“Father Van Hee was protesting a political and public policy on public property,” Polizogopoulos wrote. “The Act is arbitrary and over-broad and contrary to the Charter. As such, it is null and void.”

Van Hee reportedly began his silent protest again after Christmas, this time at the edge of the buffer zone.

Canada has some of the most radical pro-abortion laws in the world, allowing abortions for any reason up to birth. It does not have parental consent/notification requirements or informed consent requirements, and many abortions are paid for by taxpayer dollars.