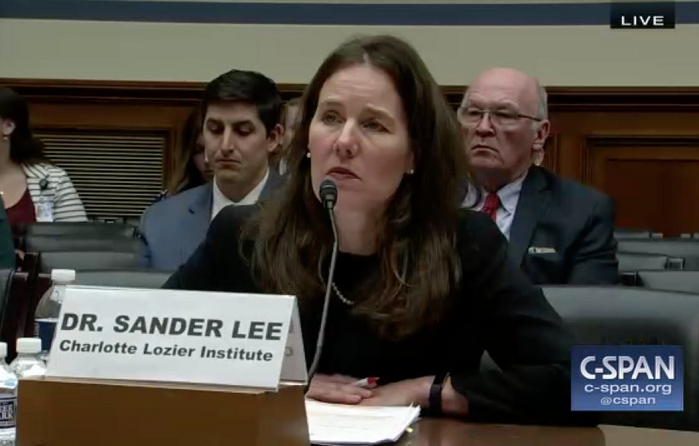 During a Congressional hearing today, a leading scientist informed members of Congress that research with body parts from aborted babies has never been needed to treat patients or find cures for diseases.

Tara Sander Lee, Ph.D. is an Associate Scholar with the Charlotte Lozier Institute. She earned a Ph.D. in biochemistry and did post-doctorate work at both Harvard Medical School and Boston Children’s Hospital in molecular and cell biology, later establishing her own lab to study congenital heart disease and vascular disorders in children.

Lee added: “In the case of vaccines, cells derived from aborted fetal tissue have been used in the development process, but fetal tissues have NEVER been the exclusive means necessary
for these breakthroughs. Instead, monkey cells, chicken eggs, and non – fetal human cells are used to produce vaccines for polio, measles, and mumps. The vast majority of scientists are focusing on other ethical tissue sources and models that work just as well, if not better. If we stopped harvesting fresh tissues from aborted fetuses today, it will not stop one person from being treated or vaccinated today nor will it inhibit the development of new vaccines going forward.”

“After over 100 years of research, NO therapies have been discovered or developed that require aborted fetal tissue. History has shown us that we never needed fetal tissue,” the stem cell research scientist added.

Lee said patients would be better off if government funded alternatives to using aborted baby parts.

“In conclusion, it is clearly evident that numerous ethical alternatives exist and are available to researchers for studying some of the most complex diseases and disorders facing our nation today. I urge Congress and the Trump administration to stop using federal dollars to support aborted fetal tissue research and redirect funding to these ethical alternatives. If we continue to invest in fetal tissue research, this will delay future progress and advances using better and more ethical science,” she said.

The good news is the Trump administration is doing just that.

The grants, under the National Institute of Health, will provide $20 million to develop alternatives to “human fetal tissue obtained from elective abortions,” according to the notice published Monday by the U.S. Department of Health and Human Services.

Over the past few months, pro-life groups and conservative news outlets have been uncovering new details about government spending on aborted baby parts for research. Some of these contracts have used tax dollars to pay for body parts of healthy, late-term aborted babies – including potentially viable unborn babies up to 24 weeks. The NIH, an agency under HHS, has given about $100 million to these research contracts.

The Trump administration has been exploring options to end the contracts and support research that uses ethical alternatives. And in September, it canceled a Food and Drug Administration contract to acquire body parts from aborted babies to be transplanted into mice.

This new move signals the administration is continuing to address the problem.

According to the HHS notice, the NIH soon will seek “applications to develop and/or further refine human tissue models that closely mimic and can be used to accurately model human embryonic development or other aspects of human biology and that do not rely on the use of human fetal tissue obtained from elective abortions.”