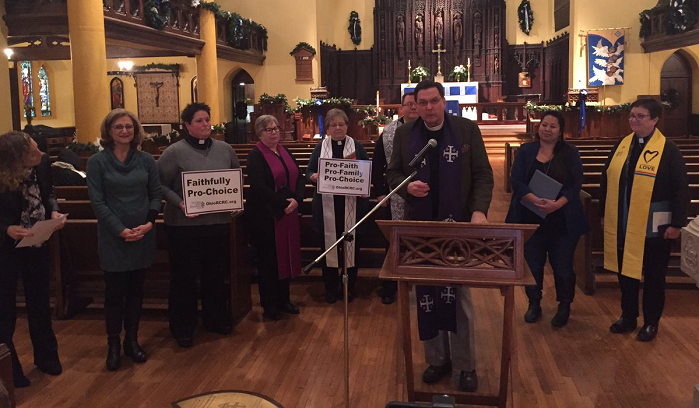 A group of Ohio religious leaders criticized lawmakers’ efforts to pass protections for unborn babies Thursday during a pro-abortion protest at a church in downtown Columbus.

The event at Trinity Episcopal Church, coordinated by the Ohio Religious Coalition for Reproductive Choice, included Christian and Jewish leaders who oppose a bill to prohibit abortions after unborn babies have a detectable heartbeat, about six weeks of pregnancy.

The state House passed the bill in November, and the Senate is considering it this week. It is expected to pass the Republican-controlled legislature.

HAPPENING NOW: Faith leaders organized by @OhioRCRC are speaking against bans on reproductive rights. We’re across the street from the Statehouse. #StopTheBans pic.twitter.com/BCuYh9ZCth

.⁦@ncjwcolumbus⁩ speaking against the 6 week abortion ban. “We encourage the legislature to pass bills that improve the health of our communities, not another unconstitutional abortion restriction.” #StopTheBans pic.twitter.com/Mq1jAxizBf

The Rev. Terry Williams, a United Church of Christ minister from Chillicothe who spoke at the protest, claimed to stand for women’s rights by opposing the pro-life bill.

“I will not stand here idly and let them strip away the rights of women and others in our state to make the right decisions for them and their families,” Williams said.

Rev Terry Williams a UCC Minister from Chillicothe OH speaks against HB 258 the 6 week abortion ban. “I will not stand here idly and let them strip away the rights of women and others in our state to make the right decisions for them and their families. ⁦@OhioRCRC⁩ pic.twitter.com/UPkk4kwPey

The Rev. Dr. Marian Stewart of the First Unitarian Universalist Church of Columbus also spoke, saying, “This bill, which does not protect the health of the woman or rape victims, is not pro-life.”

SUPPORT LIFENEWS! Help us take on the abortion industry, please help LifeNews.com with a donation!

The bill does protect life, though. An unborn baby’s heartbeat is detectable around six weeks of pregnancy, though new research suggests it may begin as early as 18 days after conception. In 2017, 20,893 unborn babies were aborted in Ohio, according to the state Department of Health. Most of those babies would be protected if the legislation goes into effect.

Rev. Marian Stewart, speaking against abortion bans, says “This bill, which does not protect the health of the woman or rape victims, is not pro-life.” #StopTheBans pic.twitter.com/sYRv4cdYD3

Other speakers included Fr. Dick Burnett, the rector at Trinity; Elaina Ramsey, executive director of the pro-abortion coalition; the National Council of Jewish Women – Columbus; Rev. Dr. Deborah Stevens, who appears to be the pastor of Broad Street United Methodist Church in Columbus; and Rabbi Jessica Shimberg, who appears to be from The Little Minyan Kehilla, a Jewish congregation in central Ohio. The radical pro-abortion group NARAL also participated.

The religious leaders’ opposition to the bill contradicts centuries of Judaeo-Christian teachings about the sanctity of life. Scriptures teach that all human lives are valuable because they are created in the image of God, and modern science has proven that unborn babies are living, unique human beings from the moment of conception.