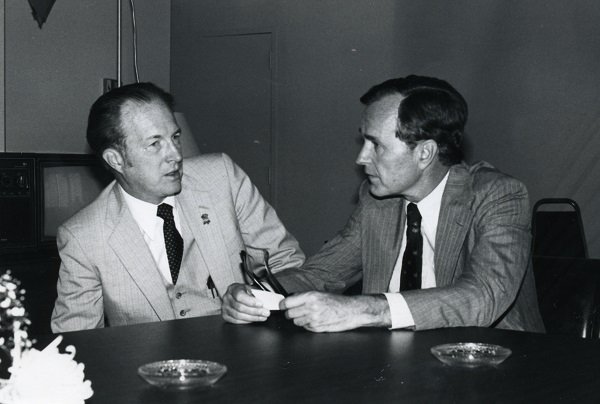 Much of the world is watching as the state funeral of former President George H.W. Bush unfolds. America does a good job of honoring our nation’s highest leaders when God calls them home.

Both as Vice President and President, George H.W. Bush was strongly pro-life. But in the early days of the 1980 election of Ronald Reagan that was far from the case.

George H.W. Bush supported abortion as a candidate for president, one of the reasons Reagan prevailed. When Ronald Reagan named Bush to run on the ticket with him during the Republican Convention, there was considerable disappointment from rank and file pro-lifers.

Dr. Jack Willke, my former colleague and founder of Life Issues Institute, was then president of the National Right to Life Committee. Upon hearing the news of a Reagan/Bush ticket, he went to the hotel that served as the Republican headquarters and asked to see Mr. Bush. Instead he was introduced to Bill Casey, Reagan’s campaign manager who went on to be Director of the CIA. Jack explained the need to see Mr. Bush and Casey agreed. He was ushered into a room where it was just the two of them.

Jack stressed to Bush the need to elect Ronald Reagan, he conveyed the complication of having a running mate who supported abortion and suggested to the candidate that he brief him on the abortion issue. Mr. Bush began to share his opinion on the issue, but Jack interrupted him saying that he’d rather hear Mr. Bush’s position on abortion after the briefing.

Then Jack added, “I need four hours to thoroughly brief you.” Bush reacted with mild shock, but he pressed on. “We represent a lot of pro-life Americans. If we can tell them that you thought this issue was so important, you dedicated a substantial amount of time to be briefed, it will make a favorable impression on our people.” Bush responded, “You make a valid point. Let’s do it.”

Jack pressed even further, asking to bring in a few pro-life leaders after lunch to discuss the campaign. Bush agreed.

A few weeks later Jack was seated on the couch in Bush’s Kennebunkport, Maine home with a slide projector between them.

Using effective imagery, Jack introduced the vice-presidential candidate to the beauty of life in the womb, as well as the shocking reality of what abortion does to babies and their mothers. They also discussed key arguments for and against abortion.

That meeting changed the course of history and many babies are alive today because of the pro-life policies of President George H.W. Bush’s administration. You can watch Dr. Willke recount this story in a brief interview here.

President Bush was good to his word.

As President, he directed his attorney general to ask the Supreme Court to overrule its pro-abortion decisions in Roe v. Wade and a later case that reaffirmed Roe’s holdings, Webster v. Reproductive Health Services.

President Bush also used his veto pen to protect unborn babies. He vetoed an entire spending bill when congressional Democrats sought to loosen the Hyde Amendment. Overall, he lodged 10 vetoes of bills that lacked protections for the unborn.

We join the nation in mourning this good and decent man. His pro-life conversion is a lasting testimony to the power of education, the foundation on which pro-life political and legislative victories are built.

Please keep the family of President George H.W. Bush in your prayers.