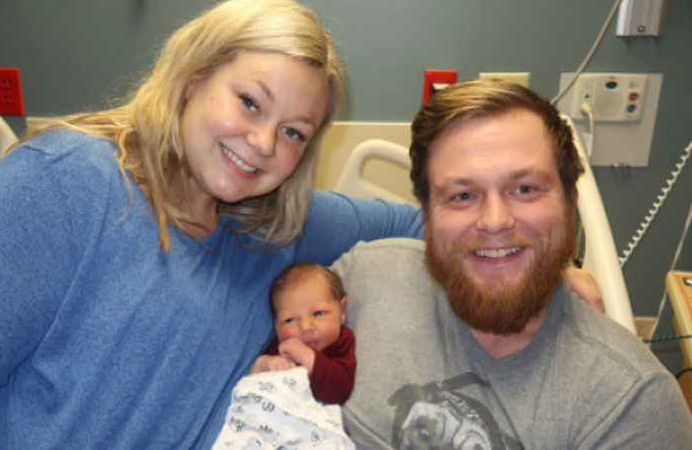 A Minnesota family experienced two miracles in a row this month with a near-death experience followed by the birth of their first child.

Ashley and Andrew Goette, of St. Paul, were joyously planning for their son’s arrival when one night Andrew began gasping for air in his sleep, Fox 9 News reports.

Not knowing what the problem was, Ashley said she called 911 and started performing CPR until the paramedics arrived. Later, the family said Andrew was diagnosed with heart arrhythmia.

Doctors said the young husband and father could have died that night, but Ashley’s quick thinking saved him.

“I don’t think Andrew would be here today if it wasn’t for the actions of Ashley,” said critical care physician Dr. Alex Teeters. “Absolutely the number one thing is she recognized that there was a problem, and called for help.”

Andrew, 28, was transported from the couple’s home in West St. Paul to United Hospital. He had gone into cardiac arrest and was placed in an induced coma to reduce the risk of brain damage.

“I didn’t want to have to think for one second about having to do any of this without him,” said Ashley. “I kept telling him the whole time he was asleep, or in his coma, that I was not going to have this baby until he woke up.”

The family’s first miracle occurred when Andrew woke up. They said it occurred because so many people prayed for him.

“Family, friends, and strangers began an overwhelming outpouring of prayer and positive thought, wrapping Andrew in a blanket of protective energy,” they wrote on the family’s GoFundMe page. “The amazing medical team at United’s ICU took it from there, lowering his body temperature for 24 hours to let his brain hopefully heal.”

When he awoke the next day, the medical team immediately began preparing him for his son’s arrival.

Lennon, or Lenny – their second miracle – was born two days later, weighing 6 pounds, 14 ounces, with his father waiting in a hospital bed nearby, according to the report.

Because Ashley needed a cesarean section, she had to leave Andrew, but the hospital staff set up a live-stream video so he could watch his son being born, the AP reports. Andrew said he was the first person to hold Lenny after he was delivered.

The family now is looking forward to going home.

“I think we’re both a little nervous to go home because it’s going to be so much different than when we left, but no we’re very anxious to get home. And to be able to cuddle, these beds aren’t very big,” Ashley told the local news. “He’s coming home. And that’s really the only thing that matters.”