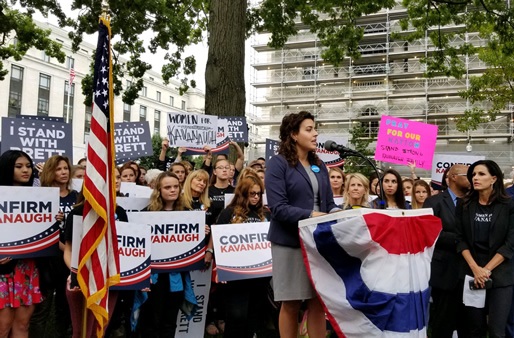 Organized by Concerned Women for America, the event’s speakers warned against “weaponizing the #metoo movement,” a movement about victims of sexual harassment and assault, the Christian Post reports.

“The #metoo movement is important and it is real,” said Penny Nance, president of CWA. “But we also believe in justice and due process. We believe in a presumption of innocence. And the minute we weaponize and politicize an important issue like rape we degrade every victim in this country. And it has to stop.”

Nance said she was attacked by a stranger 20 years ago in Virginia, but she believes the #metoo movement is being abused through politics.

Others pointed out the allegations against Kavanaugh are not about protecting victims but protecting abortion on demand. Betty DeHaven, who is a chapter leader for CWA took the train in from Martinsburg, West Virginia to show her support.

“I think it is very important to give fairness to Judge Brett Kavanaugh who is being ridiculed and shamed for no reason and I think this has become a circus. It’s absolutely ludicrous when you consider what they are doing to this man when he has had a reputation of impeccable behavior and to go back 35 years is crazy,” she told The Christian Post in an interview following the rally.

“I think this is about abortion, ultimately,” she added, “and they [the Left] are afraid. They are clutching at anything they can to preserve what they have with Roe v. Wade.”

Mallory Quigley, spokeswoman for Susan B. Anthony List, also spoke at the rally. She said a great crowd of women and others attended in support of the conservative nominee. Many held signs calling for Kavanaugh’s confirmation.

“ … we also know the other side will do anything to try to stall, delay, and sink this nomination,” she said.

Kavanaugh has served on the U.S. Circuit Court of Appeals for D.C. for more than a decade, where he wrote decisions protecting religious liberty and enforcing restrictions on abortion. Pro-life leaders believe he would do the same on the U.S. Supreme Court.