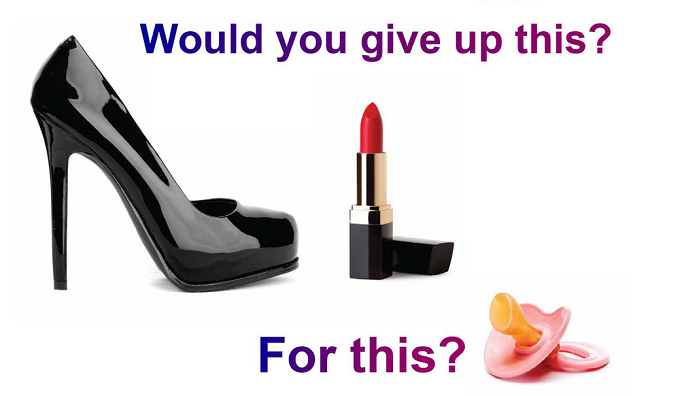 A new ad from the British government is widely being condemned as sexist for implying women must choose between having a baby or wearing high heels and lipstick.

The National Health Association ad was meant to promote emergency contraception (certain types of which may cause abortions), but even liberal women’s bloggers and commentators slammed the ad as “sexist.”

A project of the Walsall Healthcare NHS Trust, the ad asks “Would you give up this?” alongside pictures of a high heeled women’s shoe and a tube of lipstick, followed by “For this?” and a picture of a baby pacifier.

“In other words, are you ready to give up your fun, social and lipstick-wearing life to look after a baby? Because, when you’re a mother, all those things will be firmly out of your reach,” The Pool blogger Emily Baker responded. “Except, that’s not true. Having a baby – contrary to the Walsall NHS Trust’s beliefs – does not mark the end of a woman’s life.”

It has received wide condemnation from women across the political spectrum.

Pro-life advocate Rebecca Kiessling called the ad demeaning because it not only presents a false picture of motherhood and women’s abilities but also suggests women should sacrifice their children’s lives to live well.

“I am a mother of five, a soccer mom AND I’m an attorney and international pro-life speaker and activist, AND I have a lot of fun time with my girlfriends. I traveled the globe with all five of my children when they were babies,” Kiessling told LifeNews. “Don’t tell me I have to engage in child sacrifice in order to be a professional woman or to be able to have fun as a woman.”

The ad promoted emergency contraception, some forms of which may cause abortions at the unborn baby’s earliest stage of life.

There also is a male version of the insulting ads. African pro-life advocate Obianuju Ekeocha shared a version that replaces the pictures of high heels and lipstick with a video game controller. It cautions men to “Bware da baby trap [sic] – wear a condom.”

Ah!!! I knew there would be a male version of this detestable advert.

This is the cult of the “child-free” society. pic.twitter.com/qZQk6UbNxi

Here’s more from The Pool:

Kirstie Jones, a woman who went to the press after noticing the ad on a National Express West Midlands on her commute, agrees. “It’s sexist because it doesn’t understand women, it implies if you are a mother you have to give up certain things,” she said, “It doesn’t matter what you look like, what lipstick or shoes you wear when you have a baby. It’s irresponsible.”

What this advert is really saying, is that women have to make a choice between their own life and their baby’s life. Once you give birth to a child, you only exist as a mother – not a woman, not a person, not a lover or a friend.

Or in the male case, it suggests men have to kiss their free time goodbye.

The outrage is justified, but the ads’ message really is no different from what the abortion industry tells women every day. It just isn’t as obvious about it. Abortion activists tell women that the key to their economic success is abortion. That if they want to continue their education or compete with men for top level positions, they need abortions. If they want to travel, want to live out their dreams, or don’t want to settle down yet, they need to sacrifice their own baby’s lives.

What abortion activists call empowering really is demeaning – to women, to men and to children. Pro-life advocates are the ones truly empowering families because they believe moms and dads are capable enough and smart enough to parent and overcome adversities. And they believe children in the womb are valuable human beings who deserve that same chance to overcome adversities and thrive.