Today, a comprehensive report on the work of pregnancy help centers was released, celebrating 50 years of service and examining how the movement has evolved over the last half century.

The 80-page report, “A Half Century of Hope, A Legacy of Life and Love: Pregnancy Center Service Report, Third Edition,” produced by the Charlotte Lozier Institute, presents key findings from 2,600 U.S. pregnancy help centers affiliated with one or more of the three major national networks—Care Net, Heartbeat International, and NIFLA—as well as other parent pregnancy center organizations.

Chief among those findings is that pregnancy centers served nearly 2 million people in the United States with free services in 2017—an estimated community cost savings of at least $161 million.

“Looking at our collective work on a grand scale is simply breathtaking,” said Jor-El Godsey, president of Heartbeat International, a worldwide organization of 2,600 affiliated pregnancy help centers. “At pregnancy centers, we bear witness to miracles every day—as it turns out, nearly 2 million times each year—because of dedicated volunteers and generous supporters who feel called to make a difference in people’s lives.”

The bulk of community cost savings comes from the 400,100 ultrasounds performed at pregnancy centers last year. Those services saved communities over $100 million.

Over the last decade, pregnancy help medical clinics offering ultrasound have more than doubled, from approximately 700 centers in 2008 to 1,944 in 2017. Today, more than 7 in 10 centers provide ultrasound. 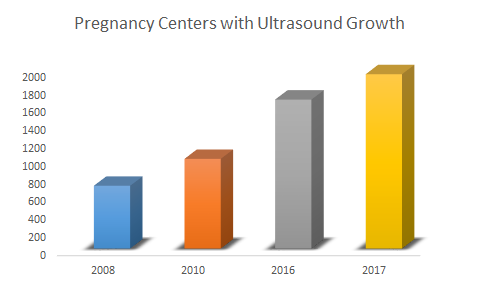 With the growth of ultrasound, the demand for medical professionals at pregnancy centers has also increased, and thousands have answered.

Registered nurses and medical sonographers contributed over 400,000 hours to pregnancy centers, and a total of 67,400 volunteers—7,500 of which were medical—gave their time to centers in 2017.

Other growing additions to the pregnancy help movement include Abortion Pill Reversal, which has saved over 500 lives since its inception in 2007, and the use of mobile units, 100 of which are now operating across the U.S.

The movement’s reach has even touched the highest tiers of U.S. government.

In his historic March for Life address this year, President Donald Trump stood alongside pregnancy help center personnel and former clients, commending their devotion and courage in the face of trying circumstances. Then, in a landmark victory capping off the movement’s last 50 years this summer, the Supreme Court of the United States struck down an onerous California law that violated the First Amendment free speech rights of pregnancy center workers.

Set free from the demands of the abortion lobby, the pregnancy help community is moving forward on its course to rescue children and their parents from the pain of abortion.

“The last half century has seen a tremendous outpouring of love and care for women and families in despair,” said Godsey. “In the face of darkness, our movement has provided light to the country and to the world millions of times over. Together, we have empowered women to rescue their babies, to reject the lies of the abortion industry, and to seek a new way of life. By the grace of God, the next half century will prove to be even more fruitful, as our ever-increasing skill, professionalism, and care propels this movement and our country to a time when every human life is treated with the love and respect we deserve.”