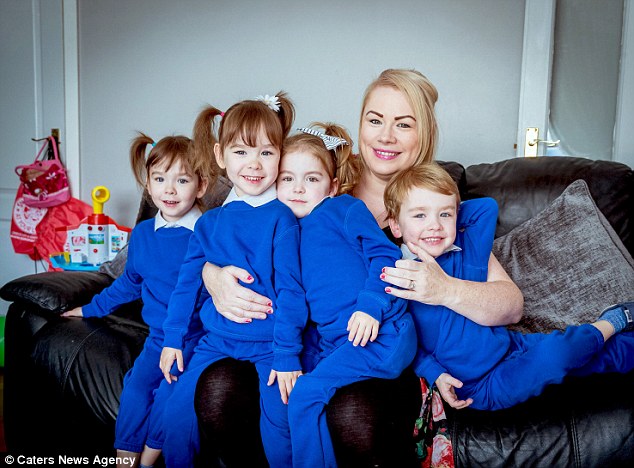 Quadruplets in Ireland are heading to preschool this summer after their mother chose life for them in difficult circumstances.

Grace Slattery, 35, and husband James, 37, of Caherconlish, County Limerick, Ireland, struggled to become pregnant and carry their unborn babies to term, according to the Daily Mail.

“We couldn’t afford IVF [in vitro fertilization] and when tests showed nothing was wrong I was baffled as to why we couldn’t have children,” she said.

The couple lost four unborn babies to miscarriage before becoming pregnant with the quadruplets. So, when doctors told Grace that her fifth pregnancy was “high risk” and suggested that she abort two of her four unborn babies, she said no, the report states.

“I was over the moon when the quadruplets were born in May 2014, and despite being offered to abort two of them before they were even born as they were classed as high risk, we decided to let fate decide,” she said.

Fortunately, the Slattery children had parents who believed that each one of their lives is valuable.

Amelia, Lily-Grace, Mollie and Lucas were born in May 2014 after 32 weeks in the womb; each weighed between 2 pounds and 4 pounds, according to the report.

“They are definitely little miracles and we still can’t believe we got four babies all at once,” their mother said. “All of them love school and as they wear a uniform now it makes it a lot easier as trying to think of four outfits for them every day takes a long time.”

This summer, the Slatterys dressed the four siblings in matching outfits for their first day of preschool. Their mother said she has mixed feelings about watching them head to school.

“I will miss them when they go back to school but it will be nice to get some peace and quiet after the summer,” she said. “Life is hectic with quadruplets but we wouldn’t change it for the world even though it had made us realize that our family is now complete.”