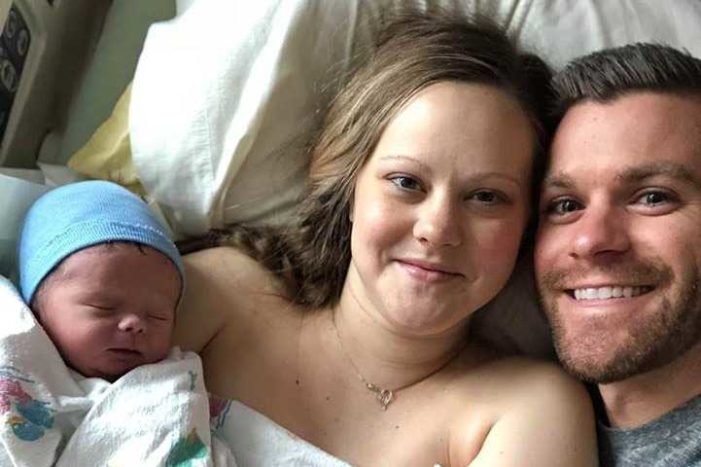 In an instant, an Iowa couple’s worst fears changed into overwhelming joy when a doctor announced that their newborn son had been misdiagnosed with a fatal brain condition.

Baby Matthew Corpstein is doing better than expected more than a month after his parents, Drew and Ariann, thought they would lose him, Christian News Network reports.

Doctors initially predicted that the infant would die soon after birth of a fatal brain condition called semilobar holoprosencephaly. But a day after Matthew was born, doctors realized that the baby boy had been misdiagnosed.

Now, the Iowa infant is expected to live a long, full life.

Ariann Corpstein was about 13 weeks into her pregnancy when tests revealed that something might be wrong with baby Matthew, she told Fox News. By 20 weeks, more tests indicated that he likely was missing most of his brain.

The Corpsteins were told that their son probably would die within a few days of his birth, and doctors encouraged them to consider having a late-term abortion.

They were recommended two options, both of which meant ending their baby’s life: obtain an abortion, or induce premature labor now in the hospital.

However, Ariann knew that she couldn’t take the matter into her own hands. She and her husband determined to trust God, no matter the outcome.

“I’m so glad that she was so strong in her foundation,” Drew told Fox & Friends on Thursday. “For me, it was very difficult. … I had always been pro-life. Abortion was never in my mind as an option. [But] when you’re told that your baby’s brain isn’t developing and they will be a vegetable on machines, maybe not hear, see, smell, you question [what to do].”

On July 29, Ariann gave birth and named her son Matthew, which means “gift from God.”

The next day, they decided to have another MRI to check his condition. The doctor who delivered the results gave the Corpsteins a huge surprise.

“He says, ‘Your baby does not have hydranencephaly,’” Drew said. “And then, he says, ‘Your son has hydrocephalus.”

“We simply couldn’t believe what we were hearing!” the couple wrote on their GoFundMe page. “We had prepared for the last 4 to 5 months of not bringing a baby home, of using hospice and end of life care, and now suddenly Matthew’s chances of survival are high and having a fully functioning life could be possible! … We know God was protecting us and our beautiful baby boy, and we had put our faith in His hands, come whatever may.”

Hydrocephalus, while serious, is not typically fatal. Matthew recently had a shunt placed in his brain to drain fluid caused by the disorder, according to the report. The condition can lead to developmental delays, but not all children develop them, the family said.

No matter what happens, the family said they are trusting God with Matthew’s life.

“A good friend called him Matthew The Great for being such a miracle, and that’s exactly what he is,” the couple said. “He is our little miracle. A boy who wasn’t supposed to be born alive, much less do anything else, has showed us that God is protecting us and blessing us beyond anything we can imagine.”