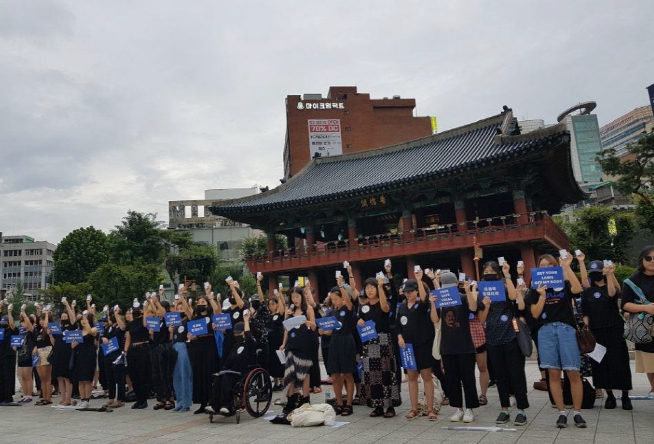 In a deadly display of defiance, 125 women in South Korea swallowed abortion drugs in protest of the country’s pro-life laws.

Korea Bizwire reports the protest took place Sunday in front of the Bosingak Pavilion in Seoul, South Korea. According to the report, 30 additional women took vitamins so that authorities would not be able to tell which women took the illegal abortion drugs.

Wearing black, they demanded that the government legalize the killing of unborn babies. The pro-abortion group claimed 125 women abort their unborn babies illegally every day in South Korea, according to the report.

Thirty other female participants took vitamin pills instead, as they are not discernible from the abortion pills, a move to protect the women who took Mifegyne during the demonstration, as such pills are currently outlawed. …

The women stated that “abortion is not taboo or sin” and that society punishes women by linking abortion to promiscuity and single women.

“Abortion is the most commonly performed surgery in the world and normal women choose to get abortions for various reasons,” continued the activists.

“Being able to get an abortion is a basic right for women.”

They also urged the government to make abortion drugs legal and easily available, according to the report.

However, the drugs are dangerous and can be deadly to the mother as well as her unborn baby. Complications from abortion drugs include excessive bleeding, infection, incomplete abortion requiring surgery and death of the woman. A Food and Drug Administration report in 2017 found that 22 women died, more than 1,000 were hospitalized and nearly 600 experienced severe blood loss that required transfusions after taking the abortion drugs in the United States.

Abortion activists have been pushing to repeal South Korea’s 59-year ban on abortions in response to the rising number of single mothers in their society, UCA news reports. In February, they submitted a petition to the government calling for legalized abortion on demand.

Currently, abortions are illegal except in cases of rape, incest, severe genetic disorders or risks to the mother’s health.

Even with the fervent campaigning against the pro-life law, South Korea has experiencing a surge of pro-life activism. It witnessed its first annual March for Life in 2012, pushing to eradicate the exceptions for abortions and restore protections for all unborn babies.

Pro-lifers also urged the government to install nation-wide baby boxes, with a similar intent as the United States’ safe haven laws, to combat the widespread problem of infant abandonment.

The Rev. Lee Jong-rak led by example when he installed South Korea’s first baby box in his home in 2009, which since has sheltered and saved the lives of at least 60 newborns.