There is a clear difference between death being caused in the “short-term” or in the “foreseeable future”.

Life expectancy for people with cystic fibrosis is increasing significantly in response to developments in treatment regimes. In the United States the median predicted age of survival for people with CF has now increased to 47 years.[8] It is by no means clear that the 11 year old child euthanased in Belgium in 2016 or 2017 was facing imminent death. He or she may have had years to live. Depression is also a particular issue with CF.[9] The “mental suffering” mentioned by Luc Proot may have been relievable through appropriate treatment.

It is not known which form of muscular dystrophy the 17 year old child had. The most serious and common form is Duchenne muscular dystrophy (DMD). “Until relatively recently, boys with DMD usually did not survive much beyond their teen years. Thanks to advances in cardiac and respiratory care, life expectancy is increasing and many young adults with DMD attend college, have careers, get married and have children. Survival into the early 30s is becoming more common, and there are cases of men living into their 40s and 50s.”[10]

On the available information it is not clear whether in this case the child was both imminently dying and experiencing unbearable physical suffering that could not be alleviated.

Euthanasia of children in the Netherlands 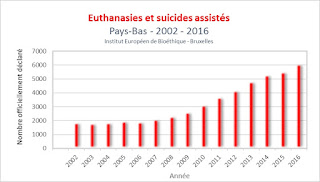 Children as young as 12 years of age may be given euthanasia under the Netherlands euthanasia law.

For 12 to 15 year old children the parents must agree with the child’s request for euthanasia before it can put into effect. For 16 and 17 year olds the parents must be involved but the decision is for the child alone.

All cases with detailed case reports (11 out of 14) involved end stage cancer.