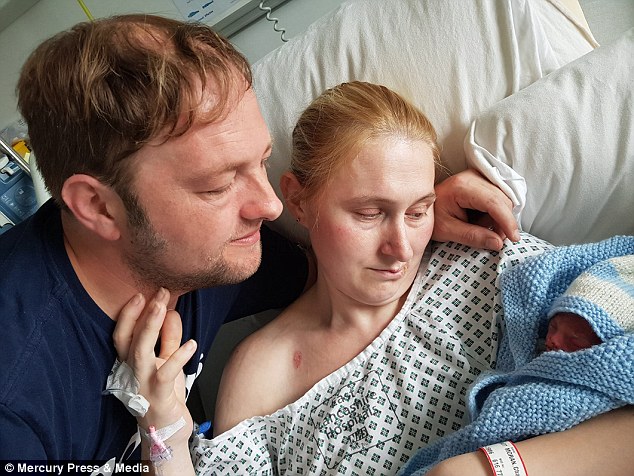 A British mother went through one heartbreak after another after giving birth prematurely while in a coma and then waking up to find her baby boy had died.

Charley Moran, of Burnley, Lancashire, England, survived a life-threatening battle with sepsis in May, but her infant son, Timothy Ryder Stott, did not, the Daily Mail reports.

The heartbreaking experience was difficult for Moran to even comprehend.

“I was diagnosed with stage four sepsis shock and they put me into a medically induced coma,” she said. “Between them taking me into theatre and putting my in a coma I just remember saying ‘what about the baby?’ I agreed to them putting me into a coma because I wanted to fight the infection and save my baby. … I would have done anything for that tiny little boy.”

On May 4, Timothy arrived after 25 weeks in the womb, weighing 1.8 pounds, according to the report. He died a short time later. At the same time, his mother was in a coma for three days, battling a kidney infection that nearly claimed her life.

Remembering when she woke up from her coma on May 6, Moran said: “I broke down, I couldn’t understand what had happened to me. It didn’t feel real. I had no memory of delivering him and no scar as I didn’t have a c-section.

“I had this beautiful little boy and I just wish he would have made it until the Sunday when I woke up and they brought him to me but it was not meant to be,” she said.

Moran said she was given the chance to spend five days with her baby boy’s body, thanks to a special cuddle cot that preserved his body for a longer period of time. She said she spent that time holding him, talking to him, singing to him and smiling at his big feet, a family characteristic.

“We say big feet means a big heart,” she said. “In those final days … I told him about the things I wished I could have done for him and that he could have done with his brothers and sisters.”

Moran, a stay-at-home mom, said she believes Timothy gave up his life so that she could survive to take care of her four older children.

“He gave up his fight so I could win mine and come back to them,” she said. “I found it very hard to take. I was thinking ‘what baby should have to give up its life to help its mum?’”

In memory of her son, she is raising money to help her local hospital purchase a second cuddle cot to help families in similar circumstances.

“I’m trying to do this in his memory and to honor the sacrifice he made for me,” she said.