Gallup has released new National polling data on the issue of abortion and the results are generally unchanged from the findings of previous years.

A separate question in the survey asks Americans whether abortion, along with 22 other behaviors and practices, is morally acceptable or morally wrong. By a slim five-percentage-point margin, 48% to 43%, Americans believe abortion is wrong from a moral perspective. In fact, abortion is the moral issue among those tested on which the public is most closely divided.

The 43% who believe abortion to be morally acceptable matches the percentage who say it should be legal in all or most circumstances.

Since Gallup first measured attitudes about the morality of abortion in 2001, an average of 41% have regarded it as acceptable and 49% as wrong. Though attitudes have fluctuated, at no point have more Americans said abortion is morally acceptable than have said it is morally wrong. 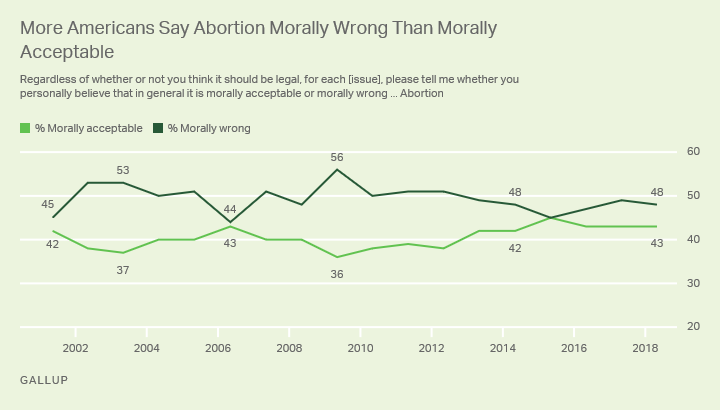 Abortion is also one of a more limited number of moral issues about which Americans’ views have not become more liberal over the past two decades.

Results for this Gallup poll are based on telephone interviews conducted May 1-10, 2018, with a random sample of 1,024 adults, aged 18 and older, living in all 50 U.S. states and the District of Columbia. For results based on the total sample of national adults, the margin of sampling error is ±4 percentage points at the 95% confidence level. All reported margins of sampling error include computed design effects for weighting.