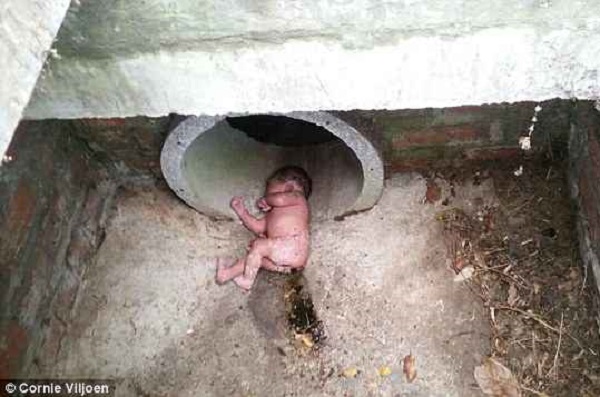 Infanticide is a major problem across the world as abortion has decreased respect for human life. Fortunately in a case out of South Africa, a baby who otherwise would have been left to die was saved.

According to news reports, the baby was left in a drain — but a woman who was out for a walk early in the morning discovered the child. Police say the baby could have only been placed their deliberately — making it clear that the baby’s mother or parents did not want the child and hoped the baby would die.

After officials arrived at the scene they determine the baby need a treatment for hypothermia and respiratory problems.

Here is more on this amazing story and the happy ending for this little child:

This newborn baby has been hailed a ‘miracle’ after surviving being abandoned naked six feet underground in a freezing storm water drain in the midst of a colony of stinging red ants.

Charmaine Keevy, 63, was out for an early morning walk with her sausage dog Georgie in Port Elizabeth, South Africa, when it suddenly started barking loudly at a drain duct in the gutter.

The catering company boss said she heard a noise and thought it was a cat mewing but when she got on her hands and knees realised she could hear a baby crying from deep inside the drain.

Charmaine began frantically waving down passing cars for help until motorist Cornie Viljoen, 60, pulled over. And after listening for himself they both agreed they could definitely hear a baby sobbing.

He grabbed a steel bar from the boot of his car and with Charmaine’s help the pair of them managed to lever the heavy concrete slab covering the storm water drain free so they could look inside.

Charmaine who found the baby on her morning walk said:’I honestly believe I was meant to find that baby by God as I usually take a different route on my dog walk but for some reason went another way.

‘I cannot help but feel that there is some sort of a plan and a purpose for that little girls’ life – it is a miracle without a doubt.

The baby weighed in at 3.09kg and the Family Violence, Child Protection and Sexual Crimes Unit of the South African Police Service have been called in to try and trace the mother.

Hospital staff have called her Grace April and she has become a celebrity on the baby ward.

Social worker Pamela Rubushe who is caring for the baby and will find her a place of safety estimated she had been lying abandoned for a couple of hours and was near to hypothermia and was found just in time.

The tragedy has sparked a conversation among community members about why a woman would ever handle an unexpected pregnancy by abandoning her child. While it is unknown whether the woman accused of causing the death of her newborn was mentally ill, it is not uncommon for women from all socioeconomic backgrounds to find themselves pregnant, scared and alone. Oftentimes these women choose to abort their unborn child. Or, in this case, abandon them.

So what are the options available to those who find themselves in a tough situation? While they don’t receive a lot of press, there are many resources for mothers in need — from church and pregnancy centers to local clinics and women’s shelters.