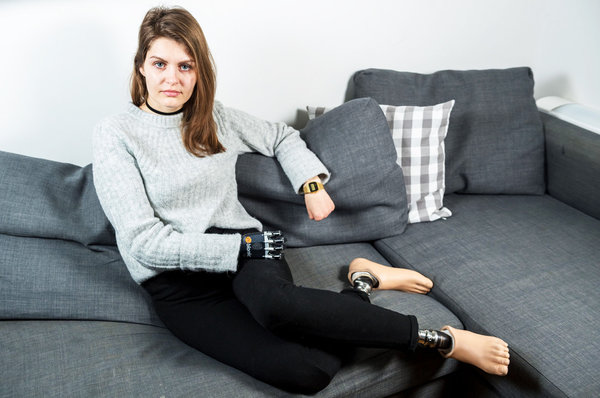 A British mother suffered huge losses when she developed an ectopic pregnancy with her third child in 2014.

Magdalena Malec, 31, of Bedfordshire, not only lost her unborn baby, she also lost three of her limbs. Malec said she developed sepsis due to the hospital’s neglect after she lost her unborn baby; it resulted in her having both legs, her right arm and the fingers on her left hand amputated, the Daily Mail reports. She now is learning to function with prosthetic limbs.

In late 2014, Malec said she felt crushed when doctors told her she had miscarried her third child. As time passed, however, the British mother said she continued to bleed heavily and suffer from severe pain.

On Christmas Day, she said she went back to the Luton and Dunstable University Hospital where they diagnosed her with an ectopic pregnancy. The life-threatening condition happens when an unborn baby implants in a fallopian tube or other location outside the womb.

The hospital quickly performed surgery, and Malec’s unborn baby died, too young to survive outside the womb. However, the tragic losses continued.

Malec said she developed extensive limb ischaemia and gangrene due to the hospital’s neglect, and later had to have several limbs amputated. She said she also had a kidney transplant as a result of sepsis.

She later learned it was caused by a loss of blood supply due to medical staff not recognising the classical warning signs for sepsis and failing to follow their own sepsis protocol.

Magdalena had to wait six months for surgery to amputate her limbs, and had to return to hospital three times a week for dialysis, with each session lasting up to four hours.

During this time, her relationship with [her partner] Robert also broke down due to the pressures of her disabilities.

Magdalena, from Luton in Bedfordshire, said: ‘I have been left on my own, starting with re-learning how to walk, comb my hair, eat and brush my teeth.’ …

The NHS has apologised unreservedly for missing all of the classic signs of sepsis that Magdalena was experiencing and accepts the outcome could have been avoided.

Officials at the hospital also apologized and admitted fault, according to the report.

“Now my life is not a life, it is vegetation – a fight for life,” she said. “I was waiting for six months for the amputation of my limbs, with stinking and decaying legs and arms.

“Nothing will restore what I had. I will never paint my nails again, I will never make a ponytail for my daughter,” she continued. “I do not trust doctors and I am very skeptical about all medical appointments and diagnoses.”

She is suing the hospital.