Fabian Stahle, the Swedish researcher who recently uncovered hidden problems with the Oregon assisted suicide model, now explains the mechanism of the euthanasia lobby to change the concept of killing through the mechanism known as Moral Disengagement.

It is difficult to write a summary of Stahle’s substantial article. I encourage you to read it.

Stahle examines Albert Bandura’s theory of Moral Disengagement to explain, based on social cognitive theory, how a social justification for acts that are otherwise considered inhumane become accepted over time.

The abstract to Stahle’s article clearly explains the importance of the article:

The international movement that promotes the legalisation of euthanasia/physician-assisted suicide (PAS) is propelled by highly potent psychological mechanisms to overcome the resistance to its agenda. It is all about cognitive restructuring to justify inhumane actions. These are always in use when normal, well-socialised persons are coerced into accepting and participating in the killing of fellow human beings. Various scientific studies, pioneered by Albert Bandura, have shown that participators are able to endure their deeds by activating these powerful mechanisms of moral disengagement.

However, those who make use of such mechanisms pay a high price. These mechanisms have a personality-changing power that dehumanizes the perpetrators. For the society that has allowed itself to be manipulated by such mechanisms for the purpose of systematizing “death on demand”, there are also serious consequences. These consequences can be described in terms of dehumanization and brutalization of that society as a whole. 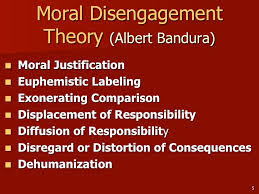 Osofsky et al.: “Operating at the behavior locus are three separate disengagement mechanisms that convert the construal of injurious conduct into righteous conduct. In moral justification, worthy ends are used to vindicate injurious means … Second, by the use of sanitizing euphemistic language, injurious conduct is rendered benign … Exonerative comparison with even more flagrant inhumanities is a third mechanism for cloaking injurious behavior in an aura of benevolence.

The second set of disengagement mechanisms operates at the agency locus by obscuring or minimizing the perpetrator’s agentic role in an injurious activity. Under displacement of responsibility, people view their actions as stemming from the dictates of authorities rather than being personally responsible for them … Because they do not perceive themselves to be the main causal agent of their actions, they are spared self-condemning reactions. The exercise of moral control is also weakened when personal agency is obscured by diffusing responsibility for injurious conduct…

The weakening moral control at the outcome locus is achieved by minimizing or disregarding the harmful consequences of one’s action. As long as the injurious outcomes are ignored, minimized, or disbelieved there is little reason for moral self-regulation to be activated.

The final set of disengagement mechanisms operates at the locus of the recipients or objects of detrimental acts through dehumanization and attribution of blame. Self-censure for injurious conduct can be disengaged or blunted by divesting people of human qualities, or by attributing demonic and bestial qualities to them … Blaming the recipients of injurious treatment for bringing suffering on themselves also serves self-exonerating purposes.”

Stahle also comments on the social effect of medicalizing euthanasia and assisted suicide.

For the euthanasia movement, this medicalization is a crucial disengaging maneuver in moving forward. But just this maneuver is especially harmful, by reason of the fact that it is aimed at the care-giving sector of our communities, which makes it a devastating stab wound in the very heart of a humane society. 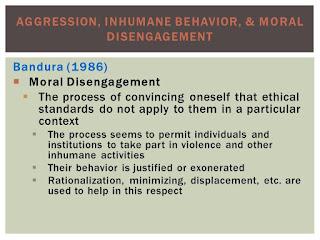 Stahle ends his article by writing:

This can be done by conducting an in-depth scientific analysis of the disengagement mechanisms in the euthanasia movement’s various activities. Such an analysis would provide much clarity and depth of insight into an activity that is shrouded in deep obscurity and could be a contributing factor in exposing the actual driving forces behind its progress. A more thorough study should also be undertaken concerning the dehumanizing effect on the functionaries in the practice of euthanasia/PAS.

The results of the studies then need to be popularized so that they become digestible for mass media, politicians, authorities, and the general public.
But first and foremost, the medical profession should be informed about the implications of Bandura’s theory on the entire euthanasia/PAS movement and of the harmful effect their participation will have on their personal and professional integrity.

Fabian Stahle first informed us of the uncovered hidden problems with the Oregon assisted suicide model, now Stahle explains the mechanism that the euthanasia lobby has employed to change the concept of killing through a mechanism known as Moral Disengagement.

I am taking Stahle’s research seriously and the Euthanasia Prevention Coalition is responding to the respect, equality and integrity of the human person through the lens of Moral Disengagement theory.