I had to read this twice. I even showed it to my wife to make sure I was reading it right.

My colleague at the Pennsylvania Family Council had just emailed out a press release in support of new state legislation that would effectively protect babies from being aborted solely based on a diagnosis of Down Syndrome.

One of the replies to this release was from an opinion columnist for a Philadelphia-based newspaper, which read in part,

“[Y]ou are compounding the emotionally overloaded abortion issue with the horror of Down syndrome babies.”

Horror. Of Down syndrome babies. Really? I have a daughter with down syndrome and she is perfect in every way. 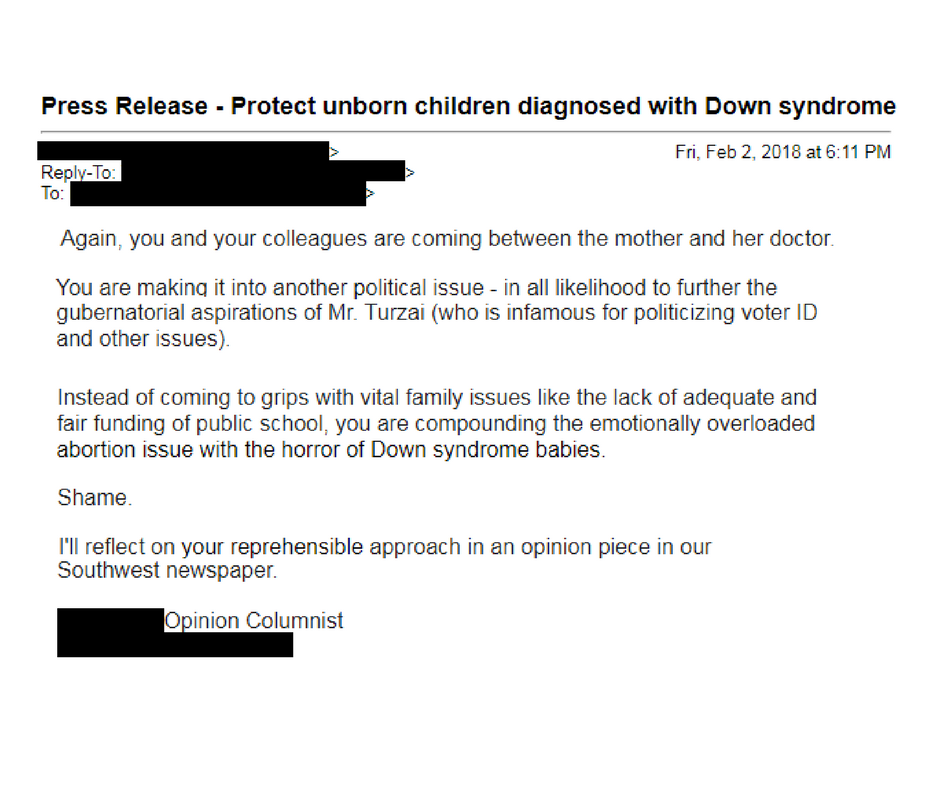 When I think of horror, I think of the “House of Horrors” where Kermit Gosnell preyed upon women and carried out countless illegal late-term abortions. (Ironically, the office of this columnist’s newspaper is in the same Southwest Philadelphia community where Gosnell carried out his horrors.)

It’s horrific that poor assumptions led most professionals and public opinion to believe that those with Down syndrome or other challenges were incapable of being a part of our society.

In fact, Pennsylvania Planned Parenthood was quick to comment on this new legislation, cloaking their eugenic intentions with a perception of caring for those with disabilities, while advocating destruction of those that don’t meet their standards of “quality of life.” Included in their statement:

“This bill would do nothing to address the serious concerns of people living with disabilities in our community.”

Planned Parenthood represents an ideology that is in direct opposition to the fight for survival and full inclusion in our society by a growing community of people with Down syndrome.

Individuals with Down syndrome, along with their families and advocates, raise several serious concerns with continuing to permit – or worse, encourage – aborting babies solely on the basis of a Down syndrome diagnosis.

1. Children with Down syndrome experience the same joys and challenges that any other child faces – they just take the scenic route.

The more opportunities given to people with Down syndrome, the more we realize they are more like typical people than they are different. Their life expectancy has grown from 25 in 1983 to 60, mainly because we’ve given them a chance at living life versus institutionalizing them. We’ve only recently opened up the public school classroom to those with Down syndrome, which has opened doors for many to obtain a proper education and pursue their passions just like anyone else.

Dr. Justin Shaw is the father to a 3-year-old daughter with Down syndrome. “She has some motor delays. She has some mild cognitive delays. But as someone once said and I love this phrase, ‘They do everything that typical children do, they just take the scenic route. And I don’t mind the scenic route.”

2. There are professionals pressuring women and parents into having an abortion when given a diagnosis of Down syndrome.

Dr. Shaw shares his story about how he and his wife were pressured by a genetic counselor to abort their daughter Eva.  This even after telling the medical professional that abortion was off the table for them. “It became clear as we sat in that session that if anything she was trying to influence us into aborting Eva.”

“If someone keeps asking you something, it’s going to shake your resolve…you assume that the doctors know,” stated actress Sally Phillips in her 2016 documentary. This documentary begins by asking the question, “What kind of society do we want to live in? And who should be allowed to live in it?”

3. The medical community still has misunderstandings about babies with Down syndrome and many parents have horrific diagnosis experiences.

In her May 2017 Ted Talk, Socially Constructing Down Syndrome: Confessions of a Rockin Mom, Cara Jacocks shares how she had a nurse tell her, “Don’t even try to breastfeed – Downs babies can’t breastfeed.” (In case you’re wondering, that’s absolutely false.)

For Karen Gaffney, her parents were told she wouldn’t be able to tie her own shoes. At 23 years old, Gaffney was part of a relay team that swam the English Channel. She is also the first living person with Down syndrome to receive an honorary doctorate. “Down syndrome is a life worth saying yes to. It is a life worth saving.”

4. The number of prenatal screening tests for Down syndrome is about to explode.

Estimates show the market for a new screening test – non-invasive prenatal testing – could quadruple in the next five years. And sadly, unless we act now, more of these precious human beings will be targeted for death.

Iceland has nearly “eradicated” Down syndrome due to abortion and a Icelandic geneticist was asked, “What does the 100 percent termination rate, you think, reflect about Icelandic society?”

It is true: raising a child with Down syndrome can be difficult and challenging, with hardship and pain. It also offers much joy and boundless, unconditional love that is a lesson to we “normal” people and to society at large.  These are people deserving of our embrace, not extinction. This test must not be allowed to be used as part of a “search and destroy” mission.—-

Planned Parenthood has a vested interest in promoting the continued abortion of babies with Down syndrome. More abortions means more profits.

We need to stop this selective targeting by updating policy just like Ohio and North Dakota have done and states like Utah and Pennsylvania are now trying to do.

We need to educate and pray for people like this Philadelphia columnist and others that share his archaic viewpoint. The opportunities and support systems for people with Down syndrome are at the best they’ve ever been. It’s helped pave the way for men like John Cronin creating a million-dollar sock company and Lucas Warren being crowned the 2018 Gerber baby – and thousands of families welcoming their child with Down syndrome into their family.

“We’re hoping this will impact everyone — that it will shed a little bit of light on the special needs community and help more individuals with special needs be accepted and not limited,” said Jason Warren, Lucas’ dad. “They have the potential to change the world, just like everybody else.”

Are we going to celebrate a country like Iceland that has 100% eradicated Down syndrome because each diagnosis in the womb results in an abortion?

Are we going to celebrate a community that is born with extra challenges and an ugly past yet with enhanced support and acceptance are making profound impacts on the world around them?

That is real beauty.

To help protect unborn children in Pennsylvania diagnosed with Down syndrome, go to tinyurl.com/ValueAll.

LifeNews Note: Jeremy Samek works for the Pennsylvania Family Council and lives outside of Pittsburgh, PA.